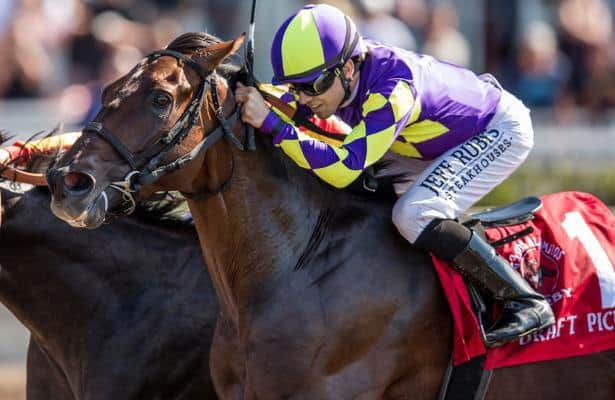 When Draft Pick missed the board in Santa Anita Park’s Sept. 28 Awesome Again Stakes (G1), ending a streak of seven straight in-the-money finishes up and down the class ladder, trainer Peter Eurton saw it as a sign not to press on to the Breeders’ Cup Classic.

Eurton’s now readying the fresh 4-year-old son of Candy Ride for a cross-country trip to Churchill Downs’ Grade 1, $500,000 Clark on Nov. 29, the day after Thanksgiving.

“I think ‘Draft’ travels well and the purse is right,” Eurton said of the 1 1/8-mile Clark. “We’ll see how he breezes on Monday. That’s what we came up with.”

Connections also considered the Dec. 7 Cigar Mile (G1) at Aqueduct, feeling that race is a bit short. Locally, Del Mar hosts the Native Diver (G3) on Nov. 23, but owner C R K Stable has another contender from the John Shirreffs barn, Midcourt, already lined up for that $100,000 stakes.

Draft Pick opened his season with a June 15 allowance optional claiming win at Santa Anita, then went on to be third in the San Diego Handicap (G2) and second in the Pacific Classic (G1) at Del Mar.

In the 1 1/4-mile Pacific Classic, “He had a really wide trip,” Eurton said, “which is probably a good thing for him because he stays out of the kickback and things of that nature. But that might have taken a little bit out of him, because he didn’t run his race in the Awesome Again. He just didn’t fire.”

A fifth-place finish was the worst for Draft Pick since the late developing colt took six starts to break his maiden. But he followed up that first victory last season at age 3 by winning Santa Anita’s Affirmed Stakes (G3) next out.

Overall, Draft Pick is 3-3-3 in 13 starts. His last two works have both been bullets at Santa Anita, with six furlongs last Monday clocked in 1:13.60.

In the Clark, Draft Pick will be up against locals such as the race’s 2017 winner, Seeking the Soul; Keeneland’s recent Fayette (G2) hero Tom’s d’Etat; and come-backing Bravazo, who last ran in January’s Pegasus World Cup (G1).

Bob Baffert relayed Friday that he’s still not sure whether 3-year-old Roadster, the Santa Anita Derby (G1) winner, will run in the Clark or Cigar Mile. Roadster breezed six furlongs in 1:12.20 at Santa Anita earlier in the morning.

Also, according to Churchill Downs publicity, Owendale, a multiple graded stakes-winning sophomore who ran 10th in the Breeders' Cup Classic, is under Clark consideration. He's scheduled to breeze Saturday.

After Preakness, who will join Rich Strike in Belmont Stakes?
Baltimore The horse trailers were double-parked ne...
x