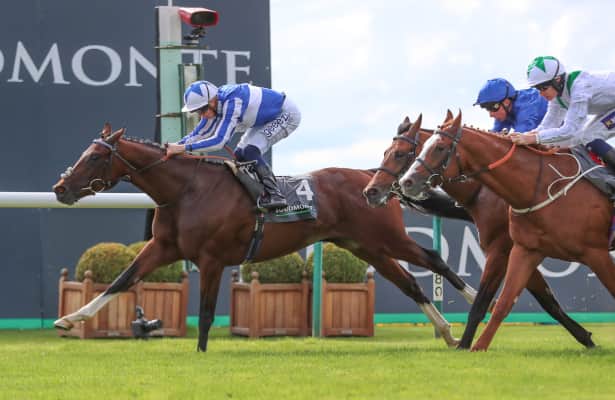 Two European juveniles stamped their tickets to the Breeders’ Cup by capturing “win and you’re in” races at Newmarket for the Juvenile Turf and Juvenile Fillies Turf.

The Foxes was held up at the rear of the four-runner field in the early stages by jockey David Probert. Entering the final furlong each of the four runners were in with a chance but it was the Andrew Balding-trained colt that came home strongest to win by one-half length.

The Foxes, a son of Churchill out of the Darshaan mare Tanaghum, completed the one-mile contest in 1:43:66 over a course listed as good.

Probert was full of praise for his mount and believes the 2-year-old colt could have a bright future.

“He’s got a lovely temperament about him and the way he’s galloped out today there shouldn’t be a problem going up in trip with him,” said Probert. “He’s a lovely prospect. He’s matured really well this horse both mentally and physically.”

Balding was also enthusiastic about The Foxes and believes a tilt at next year’s Epsom Derby (G1) could be a realistic target: “It’s hugely satisfying. King Power are very important to us and it’s lovely to have a really good one for them. I hope depending on how far he’ll stay that he could develop into an Epsom horse, that’s always the hope. His brother (Bangkok) didn’t quite stay a mile-and-a-half so that’s a question mark, but we’ll see.”

On Friday, Isa Salman and Abdulla Al Khalifa’s Commissioning announced herself as one of the best 2-year-old fillies in Europe when storming clear in the Rockfel Stakes (G2) at Newmarket’s Rowley Mile course.

Settled in mid-division in the early stages under Rab Havlin, Commissioning swept to the front with two furlongs to go, landing the victory in impressive style in only her second career start.

The winner was chased home by trainer Karl Burke’s Electric Eyes, another relatively inexperienced filly in the field, with Rage Of Bamby, trained by Eve Johnson-Houghton, 1 ¼-lengths back in third.

Commissioning, a bay daughter of Kingman out of the Galileo mare Sovereign Parade, completed the 7-furlong contest in 1:24:40 over a course listed as good.

Reflecting post-race Havlin said he believes a step up to a mile will be no problem for the John and Thady Gosden-trained 2-year-old, who following her victory, was made the favorite for the Fillies' Mile (G1) back at the same course in two-weeks’ time.

“She traveled lovely,” said Havlin. “She was behind the bridle nearly the whole way. Between the 3 and the 2 (furlong markers) I had to wake her up and I almost was in trouble of getting there too soon. I could then afford myself a little sit at the 2 pole and then when she picked up again it was immediate, and it got a little bit lonely in front. She will stay a mile no problem.”

Thady Godsen, added: “She only had her first start over the other side in the July Course, and she won that nicely, but the form wasn’t massively strong behind her. Stepping up into this you had to find out what she would be like, and she did well here today.

“As you can see, she’s got a big frame on her, but it’s not filled all the way out. We will see how she recovers from the race tomorrow and probably come back here in two weeks. Beyond that, we’ll have to see.”

The Breeders’ Cup Challenge Series is an international series of 82 stakes races whose winners receive automatic starting positions and fees paid into a corresponding race of the Breeders’ Cup World Championships, which will be held at Keeneland Race Course in Lexington, Kentucky, on Nov. 4-5.