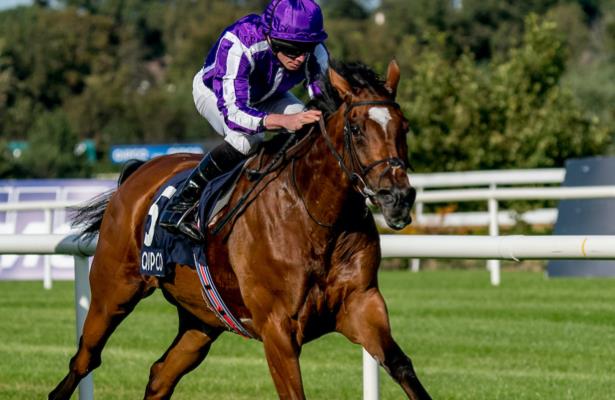 Iridessa’s victory in the Filly & Mare Turf spared the blushes of a strong-looking European party when she became the only transatlantic visitor to score in last year’s Breeders’ Cup at Santa Anita.

Hopes will be justifiably high for a somewhat better showing at the 37th edition of the two-day championships at Keeneland, where both the autumn climate in Kentucky and forgiving turf ought to play more to the visitors’ strengths.

To use the most blunt of statistical instruments, recent history suggests the Europeans will be more of a factor in Kentucky. They went home with two winners at Keeneland in 2015 — Hit It A Bomb and Found — and three more at Churchill Downs in 2018 — Line Of Duty, Expert Eye and Enable.

Moreover, this year’s European team is packed with star performers, among them an Aidan O’Brien battalion headed by that formidable race mare Magical plus classic winners such as Kameko and Siskin and high-profile Group 1 winners like Lord North and Tarnawa.

O’Brien provided both European-trained winners the last time the Breeders’ Cup rolled into Lexington, and Ireland’s behemoth stable will show up with an array of talent led by Magical and her 3-year-old stablemate Mogul in the Turf.

Well known to a North American audience after her epic battle with Enable at Churchill Downs two years ago, 5-year-old Magical looks as good as ever, having been the only horse to beat now-retired Ghaiyyath this season with a fine performance in Ireland’s top race, the Irish Champion Stakes (G1).

A subsequent third place in Britain’s version of the Champion Stakes (G1) in mid-October was not disastrous. The ground was boggy indeed at Ascot, where she raced farther back than ideal before staying on over 1 1/4 miles behind a pair of top-class, heavy-ground specialists.

Slow to mature, Mogul has finally begun to repay his $4.4 million price tag in recent weeks, running out a convincing winner of the Grand Prix de Paris (G1) from a top-class field at ParisLongchamp in September. He was quietly fancied for the Prix de l’Arc de Triomphe before his trainer’s runners had to be scratched over contaminated feed.

All in all, then, O’Brien has a strong hand in the Breeders’ Cup Turf, but this is hardly a one-man Euro band with hugely impressive Royal Ascot winner Lord North stepping up in trip for Britain’s pre-eminent trainer, John Gosden, and Dermot Weld’s star filly Tarnawa also being directed to Kentucky.

Meanwhile, a note of caution must be voiced to handicappers considering O’Brien. No European trainer has saddled as many Breeders’ Cup winners, but then again, nobody has saddled anywhere near as many runners. He habitually arrives mob-handed; his overall record stands at 12 for 147 for a strike rate just over 8 percent, having drawn a blank at the last two editions.

Despite the firepower at his disposal, O’Brien has never won a Breeders’ Cup fillies’ race; Found won the Turf against males. Nearly all his victories come from just two races — the Turf (six) and the Juvenile Turf (four). The other two are Johannesburg’s Juvenile on dirt and Man Of Iron in the now-defunct Marathon on synthetic.

O’Brien’s overall North American record in recent seasons is anything but a thing of beauty. Athena’s surprise victory in the 2018 Belmont Oaks is his sole North American winner since Mendelssohn in the 2017 Juvenile Turf, a race in which Anthony Van Dyck and Arizona both have been beaten since.

Battleground is O’Brien’s chosen one in the 2020 Juvenile Turf, and he is the favorite with European betting firms — both for Keeneland and the 2,000 Guineas (G1) at Newmarket next May. The son of War Front arrives a deal fresher than certain others in the past, unseen since he won at Goodwood in July. An intended run in the Vincent O’Brien National Stakes (G1) was ruled out when he coughed close to the race.

Though Structor kept them at bay in 2019, European horses have won eight of the 13 previous runnings of the Juvenile Turf. Others headed there include Royal Lodge Stakes winner New Mandate, the mount of Frankie Dettori, French Group 1 winner Sealiway and leading Irish juvenile Cadillac.

Elsewhere among Future Stars Friday, the Europeans do not look as well represented in either the Juvenile Fillies Turf or the Juvenile Turf Sprint, and multiple Group 1 winner Glass Slippers will need to get going quicker than usual if she is to trouble the locals in the Nov. 7 Turf Sprint.

Also on Breeders’ Cup Saturday, the O’Brien team features the tough miler Circus Maximus, out to improve on last year’s fourth-place in the Mile. That is where chief European interest will rest with a pair of 2,000 Guineas heroes in Kameko and Siskin, winners in England and Ireland, respectively, after racing resumed in June following the COVID-19 interruption.

After some bad luck and a number of unsuitable assignments over longer trips, Qatar Racing’s Kameko regained the winning thread last time under champion jockey Oisín Murphy at Newmarket.

Siskin is having his swan song and will be retired to Japan after the race. Seven-furlong specialist One Master was beaten only a length when fifth in 2018.

While the British and Irish record in the Mile is nowhere near as impressive as might be imagined, the same caveat cannot be issued with regard to the Filly & Mare Turf, although Chad Brown has done his best to redress the balance in recent years.

As many as eight Euros could run in the Filly & Mare Turf this time around. Tarnawa would be a leading fancy but this is a second preference after the Turf. In her probable absence, horses such as Terebellum, Peaceful and Cayenne Pepper bring a high level of European form, while Angel Power is a big improver.

Nicholas Godfrey is a London-based international racing expert. A former winner of the Joe Hirsch Award for Outstanding Newspaper Writing at the Breeders’ Cup, after nearly 29 years at the Racing Post he founded the website Horse Racing Planet in 2020 and remains a regular contributor to At The Races, Thoroughbred Racing Commentary and Sky Sports Racing in Britain plus Al-Adiyat magazine in Dubai.