Ete Indien dominates with front-running win in Fountain of Youth 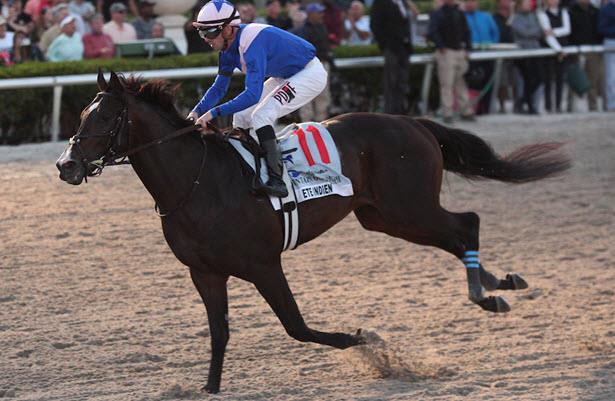 Breaking from the outside stall, Ete Indien and jockey Florent Geroux shot straight to the front and never looked back en route a gate-to-wire victory in the $400,000 Fountain of Youth Stakes (G2) at Gulfstream Park, which provided the winner 50 qualifying points towards the Kentucky Derby.

Given the short run-up to the first turn in the 1 1/16-miles contest, Geroux was intent on clearing the field early, which is exactly what happened. Ete Indien broke alertly, got the lead and dropped down on the rail. From there, it was not much of a contest. Ete Indien motored on the front-end through fractions of :23.58, :46.72 and 1:11.30 for three-quarter of a mile. He opened up his lead through a mile in 1:36.44 and drew off late to earn his first career stakes win by 8 1/2-lengths for trainer Patrick Biancone.

Longshot Candy Tycoon was second to earn 20 qualifying points toward the Kentucky Derby. He was followed by As Seen on Tv (10 points) and Shotski (5). Favorite Dennis' Moment, making his first start since stumbling out of the gate in the Breeders' Cup Juvenile (G1), raced in mid-pack before fading on the second turn. He finished last in a field that was reduced to 10 with the scratches of Chance It and Makabim.

"[Flavien Prat] said it looked like he grabbed himself a little bit, I don't know where he did it or how he did it," Romans said immediately after the race. "He said he had plenty of horse until the five-eighths pole and then he dropped the bit. We'll go back and see what's going on with him."

A subsequent tweet from the Romans stable said Dennis' Moment "looked good" and there were "no injuries."

ETE INDIEN was unstoppable in the G2 Fountain of Youth Stakes @GulfstreamPark for Trainer Patrick Biancone with @FloTheJock on the mount! @Gabby_Gaudet_ caught up with winning connections @andie_biancone immediately following the race! pic.twitter.com/IECMN60xNG

Geroux was riding Ete Indien in place of an injured Luca Panici, himself a native of Italy who had ridden Ete Indien in three of his four prior starts including the Holy Bully.

“We have been through a week of hiccups," Biancone said. "First we lose our jockey [Luca Panici, to injury] and second we draw [outside]. But good horses can overcome everything and I think he’s an exceptional horse. We look forward to the future."

Ete Indien, which is French for "Indian Summer," was a debut winner at Gulfstream on Sept. 13. After running eighth in the Bourbon Stakes (G3) at Keeneland, Ete Indien closed out his juvenile campaign with a Gulfstream Park allowance win. In the Holy Bull, the son of Summer Front set the pace for a half-mile and finished three lengths back of Tiz the Law.

"I want to see how he comes back, how he works the next time," Biancone said. "He’ll need to improve a little bit to be able to win the Florida Derby. We’re here in Florida, he’s training in Florida and we love Florida. I think we’ll take a shot if he’s in good form.

"If he wins next time, we’ll go to the [Kentucky] Derby. And if he doesn’t win next time, he will stay home,” Biancone added.

Biancone signed the ticket for Ete Indien as agent for $269,640 at last year's Arqana May 2-year-old breeze-up sale in Deauville, France.

As for Dennis' Moment, Prat also provided further insight into his performance to the Gulfstream publicity department.

"He bobbled out of the gate but then after that he regrouped and I thought I was in a good spot," Prat said. "When I hit the five-eighths pole, he just dropped the bit and after that I was done. After that, there was no reason to beat him up. He didn’t want to go.”