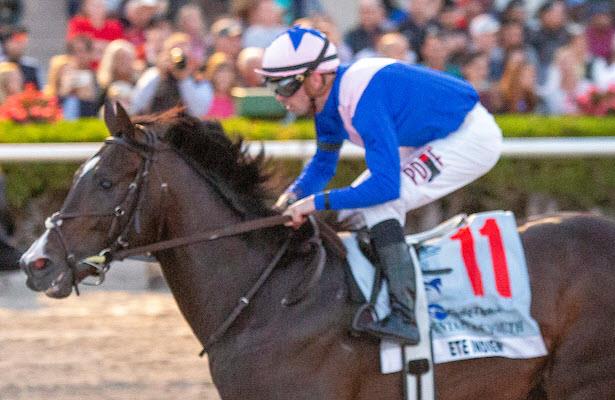 It was a little more than a month ago when trainer Patrick Biancone looked like he would be back in the Kentucky Derby (G1) for the first time in 15 years with not one but two horses.

Now he is not so sure with Été Indien. And he might need a defection or two to get Sole Volante into the field.

“Été Indien had a little setback,” Biancone said by phone Tuesday morning from Palm Meadows Training Center in Florida. “The Derby will be a 50-50 possibility. And Sole Volante is recovered well from the bad experience in the Belmont. He’ll go straight for the Derby.”

That actually does not seem so bad for two horses that have been off the work tab since June, when Sole Volante staggered home a tiring sixth in the Belmont Stakes (G1) and Été Indien disappointed with a fourth-place finish in a Gulfstream Park allowance race.

The next week and a half will be especially pivotal for Été Indien. Although Biancone would not elaborate on the “little setback” that came after a breeze June 28, he did say a decision will be made in the coming days about the Fountain of Youth (G2) winner that also finished third in the Florida Derby (G1).

“We needed to be patient,” he said. “I’ll see if he’s back to being 100 percent fit and sound and happy by the end of next week. If he is, he’ll be back on the (Derby) trail. If not, we’re not going to force him to do things.”

For Sam F. Davis (G3) winner Sole Volante, the path to Churchill Downs is more straightforward – at least the part that Biancone can control. A Friday workout at Palm Meadows will get him back on the work tab for the first time since the Belmont.

Biancone realized it was important to rest Sole Volante again. And he regretted forcing the Karakontie colt into the Belmont only 10 days after winning an allowance race, the one in which Été Indien was the beaten favorite.

“I got stupid to run him,” Biancone said. “I misjudged the energy level and the inside nervousness. He’s usually a very cool horse. So we took a shot. I made a wrong decision. We spent $30,000 on the plane to fly the horse (from Florida to New York). But anyway, it’s done. What can I do? Nobody’s perfect. I got it wrong that time.”

Then again, Biancone found himself painted into a corner by the coronavirus. After a second-place finish in the Tampa Bay Derby (G2), suspensions brought on by the pandemic wiped out the logical choices for a next race and forced Sole Volante into a longer-than-expected break before the rescheduled Triple Crown began in New York.

Now Biancone looks at the 2 1/2 months between the Belmont and the Derby as beneficial for Sole Volante, saying, “Each time he has been more than five weeks between races, he’s run a blinder.” Before the June allowance win, Sole Volante had come from nine lengths back to finish a competitive third in the January running of the Mucho Macho Man Stakes at Gulfstream Park.

“We’re delighted with him,” Biancone said. “He had a nice two-minute lick (Tuesday) morning. It’s fantastic. He’s back to his best. And we’re going to come fresh on the 5th (of September) for the Derby.”

That is, as long as Sole Volante’s 30 points get him in. He currently is 20th among active Derby horses, with Uncle Chuck poised to catch or overtake him with a top-four finish next week in the Travers (G1) at Saratoga. The top 19 qualify – maybe 20 if Europe turns down its Derby invitation as Japan did.

“I think there’s some horses that are not going to run,” Biancone said. “But I’m not going to bring my horse into a (late prep) race just to get points. I want to bring him to the Derby 100 percent perfect.”

On the same day as the Kentucky Derby, Biancone hopes to see Diamond Oops repeat his 2019 victory in the Smile Sprint Stakes (G3). The 5-year-old gelding by Lookin At Lucky will prep for that by racing Sunday in the $60,000 Opening Lead, a six-furlong overnight stakes for 3-year-olds and up at Gulfstream Park. It will be just his second race since he was fourth in the January running of the Pegasus World Cup Invitational (G1).

“Last year we had him cooked at the end of the year,” said Biancone, who saddled Diamond Oops in a pair of runner-up finishes in Grade 1s before he wound up eighth in the Breeders’ Cup Dirt Mile. “This year, he’ll be very upbeat. After he runs in the Smile, hopefully we’ll get him fresh for the Breeders’ Cup.”

At 66, Biancone sounds full of energy himself. That is especially good news since he had a cancerous left kidney removed during the winter. By March, though, he was declared cancer-free.