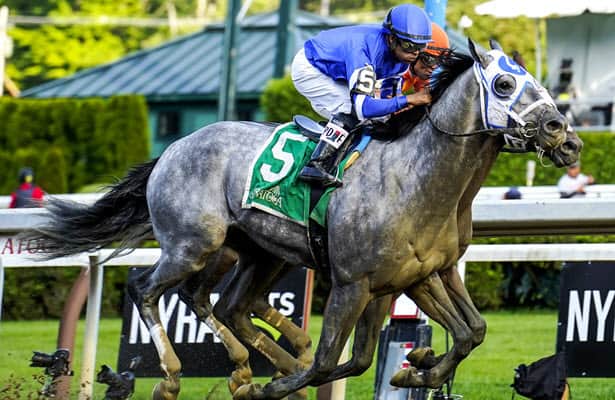 Essential Quality overcame a wide trip to prevail in another stretch battle Saturday at Saratoga, holding Keepmeinmind at bay to win the Grade 2, $600,000 Jim Dandy Stakes.

"He always fights and he always wants to win," jockey Luis Saez said.

Under Saez, Essential Quality broke from the outside post in a five-horse field. Early on, he and Keepmeinmind stayed behind pace-setting Dr Jack, plus Grade 3 winners Masqueparade and Weyburn.

The Todd Pletcher-trained Dr Jack set fractions of 23.81 and 47.41 seconds through the first half-mile. Coming through the far turn, the second-through-fifth place runners drove past the leader and set up a four-way battle into the stretch.

Essential Quality was widest of that quartet, with Keepmeinmind running along the rail. Those two put away Weyburn, then Masqueparade, and then battled on to the finish.

The 2020 Kentucky Jockey Club Stakes (G2) winner Keepmeinmind pushed Essential Quality to the wire, but the Belmont hero prevailed by a half-length. The Godolphin homebred covered nine furlongs in 1:49.92, paying $2.80 as the 2-5 favorite.

“There was a lot of ground lost today," said Cox, 2020 Eclipse Award winner for outstanding trainer. "Luis obviously had to work to win. He got something out of it, I do think that. I think he’s carrying a little more weight now than he was leading up to the Derby or Belmont. I think this was a good tightener for him, four weeks out (from the Travers)."

The Jim Dandy’s six-horse field was reduced to five because of the scratch of Withers Stakes (G3) winner Risk Taking.

Essential Quality has earned three of his 2021 victories by way of stretch duels. He also outlasted Highly Motivated in April by a neck at Keeneland in the Blue Grass Stakes (G2), then dug in to defeat a game Hot Rod Charlie by 1 1/4 lengths in the Belmont.

“It reminded me a lot of the Blue Grass," Cox said. "Even though we turned for home we were right there, but it took a while to get past (Highly Motivated). He’s able to dig in, fight and move on. He’s not the flashiest horse and Luis works on him. That’s just him.”

For his career, Essential Quality is now 8: 7-0-0 with nearly $3.55 million in earnings. His graded wins have come in the 2020's Breeders' Futurity (G1) and Breeders' Cup Juvenile and this year's Southwest Stakes (G3), Blue Grass, Belmont and Jim Dandy.

Keepmeinmind's runner-up performance marked his best finish since winning the Kentucky Jockey Club last November – his lone win. The Robertino Diodoro trainee has finished behind Essential Quality in five of his 10 career starts, crossing second behind him both last October in the Breeders' Futurity and Saturday at Saratoga.

“He kept on going and going, but the horse on the outside (Essential Quality), he couldn’t hold him," Keepmeinmind jockey Joel Rosario said.

Masqueparade's third-place finish in the Jim Dandy snapped a three-race winning streak. He won an allowance race at Churchill Downs on the Kentucky Derby undercard in impressive fashion, then took Thistledown's Ohio Derby (G3) last month in his stakes debut.

The Al Stall Jr.-trained Masqueparade lacked a late punch Saturday when battling Essential Quality and Keepmeinmind in the stretch.

“I can’t find much of an excuse," Stall said. "We were dealing with the pace horses and we survived the pace and the other two up there with us were out the back door. We were still there fighting towards the end.

"He’s a horse who has given up a lot of seasoning to these types of horses and I think he handled himself really well.”