Essential Quality may be a step closer to Belmont Stakes 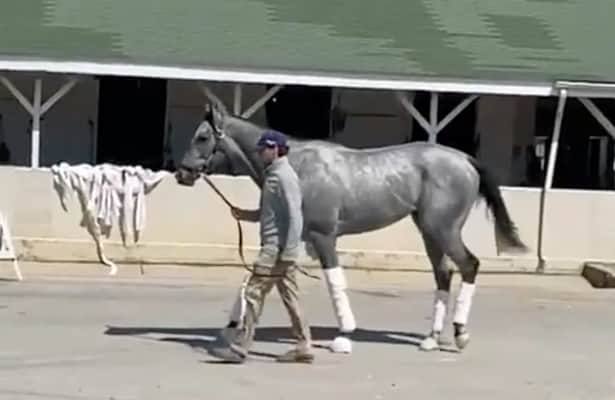 Essential Quality may have moved a step closer to the Belmont Stakes with his workout during the weekend at Churchill Downs.

Cox and Godolphin reported following the Derby that Essential Quality would be considered for the third jewel of racing’s Triple Crown, the $1.5 million Belmont Stakes. A next-race option for Mandaloun is still to be announced.

Another Derby runner that recorded a Saturday work was Tampa Bay Derby (G2) winner Helium, who cruised an easy half-mile in :48.8. Trainer Mark Casse's local assistant David Carroll reported the colt could target the $150,000 Matt Winn (G3) on May 29 at Churchill Downs.

One of the few horses to close significant ground into the pace of the Kentucky Derby was O Besos. The Orb colt worked a half-mile in 49.2 Saturday with jockey Marcelino Pedroza in the saddle. Trainer Greg Foley reported several options are being considered, but a decision has not been made final.

On Sunday, Jeff Ruby Steaks (G3) winner Like the King returned to the turf to work five furlongs in 1:02.4 under jockey Tyler Gaffalione with trainer Wesley Ward watching from the grandstand. Ward reported the son of Palace Malice could be considered for the Audubon, run at 1 1/8 miles over the turf.

Below is the latest Belmont Stakes field according to Horse Racing Nation's stakes tracker.