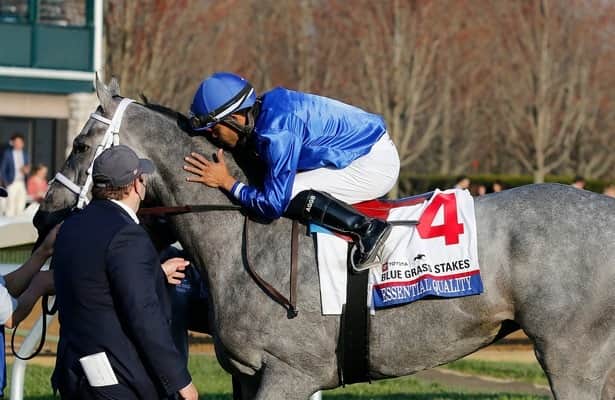 Brad Cox’s Kentucky Derby dreams began when he was “probably 14 or 15.”

“I think anybody that has that dream dreams of doing it at the highest level and trying to win the Kentucky Derby,” Cox, now 41, said Saturday at Keeneland.

Cox hails from Louisville, Ky., the city that hosts horse racing’s biggest annual prize, and the city where he grew up dreaming of triumph under the Twin Spires.

The trainer now has a colt that could turn those dreams into a reality in Essential Quality. 2020’s champion 2-year-old outdueled game rival Highly Motivated in a thrilling stretch battle Saturday to win the Grade 2, $800,000 Blue Grass Stakes.

Essential Quality improved to 5-for-5 in his career with the Keeneland score. Now he marches on to the Kentucky Derby, where he could be the favorite.

“He’s ready to go,” Cox said. “We need to continue to do what we’ve done over the next four weeks and hopefully we’ll get a similar performance.”

Essential Quality, a gray son of Tapit, has a unique chance to score a breakthrough triumph for each of his connections. Cox, jockey Luis Saez and owner/breeder Godolphin all are aiming for their first official Kentucky Derby victories.

Cox earned the 2020 Eclipse Award for outstanding trainer after a season that culminated in four Breeders’ Cup victories at Keeneland. He has won a pair of Kentucky Oaks and a Breeders’ Cup race at Churchill Downs in the last three years and now seeks victory in what he called “the biggest race in the world.”

A reporter noted that no native-born Louisvillian has ever trained a Derby hero.

“That’s why I say it’s time for that to change,” Cox said with a smile.

A Kentucky Derby score also would be meaningful for Saez. The jockey crossed first in the 2019 Derby under Maximum Security but was denied a win after stewards disqualified the colt for interference and promoted Country House to the win.

In the two years since that DQ, Saez has further cemented himself as one of the game’s top riders. He won nine Grade 1 races in 2020, including the Breeders’ Futurity and Breeders’ Cup Juvenile with Essential Quality, and he scored a Dubai World Cup (G1) victory March 27 with Mystic Guide.

“He’s a fantastic, world-class jockey,” Cox said. “He’s one of the best in the world.”

“Unfortunately, that happened to me,” Saez said of the 2019 Derby DQ, “but that’s in the past.

“We never stay down. We always look to come back and see if we can win the race. If we win the Derby this year or next year, it’s going to be very big for me and my family.”

Godolphin also has never won a Kentucky Derby. The powerhouse Thoroughbred operation has been on fire recently though, scoring wins with Mystic Guide in the Dubai World Cup, Rebel’s Romance in the UAE Derby (G2) and now Essential Quality in the Blue Grass Stakes.

Godolphin USA president Jimmy Bell said it is “very special” for Godolphin to compete for a breakthrough Kentucky Derby with a homebred in Essential Quality.

“They’re living, breathing animals, and so many things get so close yet so far away,” Bell said. “We’ve been so blessed and fortunate that he’s never really had a bad day. That means a lot as we’re getting ready to make the trek up to Louisville.”