Essential Quality shortens to 8-1 for the 2021 Kentucky Derby 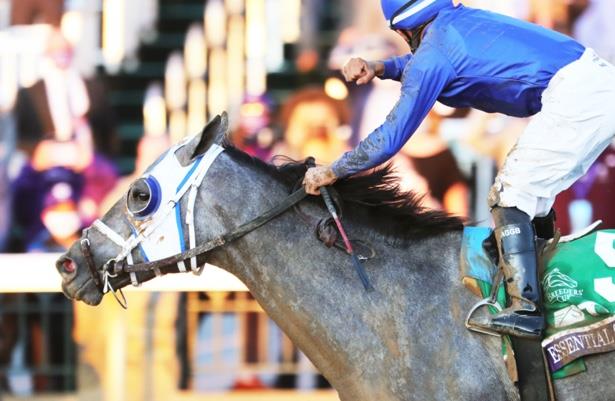 Is it worth taking 8-1 odds and immediate action on the current favorite for the 2021 Kentucky Derby when the race will not be run for another 5 1/2 months?

That is one way of framing the discussion about Breeders’ Cup Juvenile winner Essential Quality after he was cut to those odds in the current futures market at William Hill Nevada.

None of the other 124 listed Derby hopefuls carries odds shorter than 40-1.

Faith in Essential Quality preceded his Nov. 6 victory at Keeneland, his second win going two turns on that course. After opening at 20-1 in the futures, trainer Brad Cox’s colt by Tapit shortened to 12-1. After his Keeneland triumph he was cut to 10-1, and then late last week to 8-1.

Those are the same odds that Tiz The Law carried this time last year. That was a month after he had won the Champagne (G1) and two weeks before his loss in the Kentucky Jockey Club (G2).

By means of comparison, there has been an average of three horses with post-time pari-mutuel odds shorter than 8-1 in the last five runnings of the Derby.

Despite his eighth-place finish in the Breeders’ Cup Juvenile, trainer Bob Baffert’s $775,000 colt Classier shortened to 40-1 from 80-1, making him the co-second choice with former futures favorite Jackie’s Warrior.

Highly Motivated, a black-type stakes winner on the Breeders’ Cup undercard, remained 45-1. Hot Rod Charlie, the surprise runner-up in the Juvenile, and Dr. Schivel, the Del Mar Futurity (G1) winner that is being freshened for the winter, are still 50-1.

Despite being off the work tab since breaking his maiden in August at Del Mar, Vittorio was cut from 110-1 to 90-1.

At 350-1, the 1-for-4 maiden winner Valiant Thor remains the longest shot on the board.