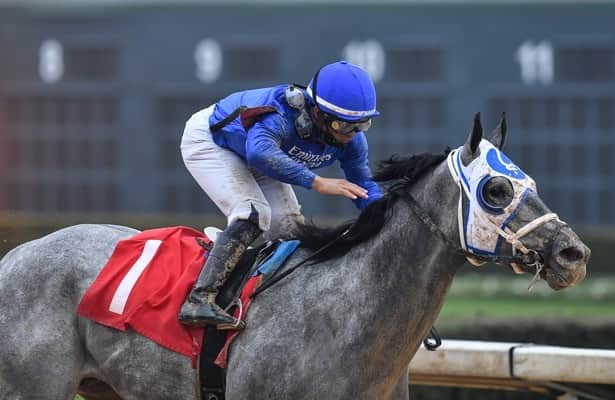 Two weeks of postponements and an off track were not enough to knock champion Essential Quality off his game.

Making his first start since last November’s Breeders’ Cup Juvenile, Essential Quality drew off for a 4 1/4-length win Saturday at Oaklawn Park in the Grade 3, $750,000 Southwest Stakes. The Godolphin homebred picked up another 10 points on the Road to the 2021 Kentucky Derby, giving him 40 overall.

#EssentialQuality, a son of @Gainesway’s #Tapit, keeps on rolling in the @godolphin blue with the easiest of wins in the Southwest Stakes with Luis Saez up for @bradcoxracing. pic.twitter.com/CJCKWcoPbV

The Southwest marked a 2021 debut for Essential Quality, who garnered the 2020 Eclipse Award for Champion 2-Year-Old Colt. The Tapit colt won on debut at Churchill Downs on the Kentucky Derby undercard, then posted back-to-back Grade 1 triumphs at Keeneland in the Breeders’ Futurity and Breeders’ Cup Juvenile.

"You never know when they go 2 to 3," Essential Quality trainer Brad Cox told FS2's "America's Day at the Races" after the win. "Just because they’re training well doesn’t meant they’ll move forward. But I thought he moved forward today. I thought it was a huge effort. It’s what I was hoping to see."

Oaklawn's Southwest was originally supposed to run Feb. 15 but was delayed 12 days due to harsh winter conditions at the Hot Springs, Ark., track. Then Saturday, as the race was finally to occur, rain showers resulted in the track being listed as sloppy.

As seven 3-year-olds broke out of the gates and into an afternoon fog, Jackie’s Warrior went out to the lead. A two-time Grade 1 winner as a 2-year-old in 2020, the Steve Asmussen trainee went through opening fractions of 23.52 and 48.11.

"The plan was to try to follow him (Jackie’s Warrior) the whole way," Saez said. "Everything came together."

Turning for home, Essential Quality took over. He dispatched both Woodhouse and Jackie’s Warrior, and was not threatened by a late run from Bob Baffert trainee Spielberg.

Essential Quality hit the wire in 1:45.48, improving to 4-for-4 and returning $3.80 as the 4-5 favorite. Spielberg and Jackie’s Warrior crossed second and third, respectively, with Woodhouse settling for third.

Cox credited Saez with getting Essential Quality, who drew Post No. 1, into good running position early in the race.

"Luis did a good job of getting off the rail from the 1-hole, which was a fantastic job the first sixteenth of a mile to get him in position," Cox said. ...

"When Luis asked him to pick it up, he really stayed on him. He’s got a lot of stamina. He’s a horse that the further we go, the better he gets, honestly.”

"As an American horse trainer, I think it’s No. 1 on most everyone’s list," Cox said of the Derby. "I’m just excited to be in the position we are with three really good colts. Fingers crossed.

"It’s 60-something days away but it’s going to be a long 60 days with these three really nice colts.”

Second-place Spielberg recovered from a slow start Saturday to tally four more points toward the Kentucky Derby and now sits seventh in those standings with 17. The Union Rags colt who sold in 2019 for $1 million now sports an 8: 2-3-1 record, highlighted by a Los Alamitos Futurity (G2) win.

“After the start, (jockey Martin Garcia) didn’t panic," said Baffert, who has often shipped some of his Southern California-based Derby prospects to Oaklawn. "He stayed back there and rode his race. He was just moving a little (in the gate). But, you have to give credit to the winner. He’s a good horse. I’m proud of the way (Spielberg) ran. He showed up. I’m very happy. Other than the gate, everything went well. He shipped well and he ran well.”