Essential Quality will not race next year (neither will Maxfield) 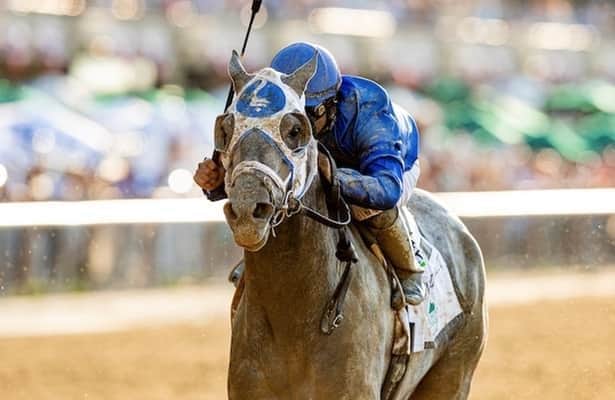 Darley in America will have two new additions to its stallion roster for 2022 as Breeders’ Cup Juvenile and Belmont Stakes winner Essential Quality and fellow Grade 1 winner Maxfield are set to retire to Jonabell after their final starts.

“To have both Essential Quality and Maxfield coming to Jonabell is as exciting as it gets,” Darley sales manager Darren Fox said. “And to have accomplished what they did as homebreds in the colors of Godolphin makes it even that much more meaningful.

“They consistently performed at the highest level and if you add in their outstanding pedigrees and conformation, we feel very confident that their legacy will continue to grow through their future offspring.”

Essential Quality is a son of Tapit out of a Grade 3-placed half-sister to Champion and Breeders’ Cup Juvenile Fillies winner Folklore. He has won eight of nine career starts – four at the Grade 1 level – and was named 2-year-old Eclipse Champion of 2020 following Grade 1 victories in the Breeders’ Cup Juvenile and Breeders’ Futurity. While winning the Juvenile, he recorded the highest Beyer of any 2-year-old beyond a mile last year.

In 2021, his victories include the Belmont Stakes in which he recorded a 109 Beyer Speed Figure, becoming the first Breeders’ Cup Juvenile winner ever to capture the Belmont. He went on to win the Travers (G1) at Saratoga, joining Street Sense as the only Champion 2-year-olds in the past 30 years to take the “midsummer Derby.”

A Grade 1 winner at 8 1/2, 10 and 12 furlongs, Essential Quality also lists three other Graded victories to his credit. He was also beaten only a length when fourth in this year’s Kentucky Derby. His fee will be set following the Breeders’ Cup Classic on Nov. 6.

Maxfield has never been off the board in 10 career starts and was an outstanding winner of Keeneland’s Breeders’ Futurity (G1) as a juvenile, like his future barn mate Essential Quality.

Maxfield’s six other career victories include the Stephen Foster (G2) and Alysheba (G2) at Churchill Downs. Three additional 2021 G1 placings include runner-up finishes in Saratoga’s Whitney (G1) and the Woodward (G1) at Belmont and a third in the Santa Anita Handicap.

A son of Darley stallion Street Sense, Maxfield is out of the Bernardini mare Velvety, a half-sister to Grade 1 winner and successful sire Sky Mesa.

Like Essential Quality, Maxfield’s fee will be set following his final race, the Clark Handicap (G1) at Churchill Downs on Friday, Nov. 26.

“In addition to the excitement of two new stallions, we are hearing from breeders a great deal of optimism especially with the strong sales results this year,” Fox said. “It goes without saying that times were tough for the industry last year but ours is a resilient bunch and hope springs eternal for the coming year. All that said, we are still maintaining moderation when setting our fees with only one of our top-tier stallions returning from last year seeing an uptick in price at this time.”