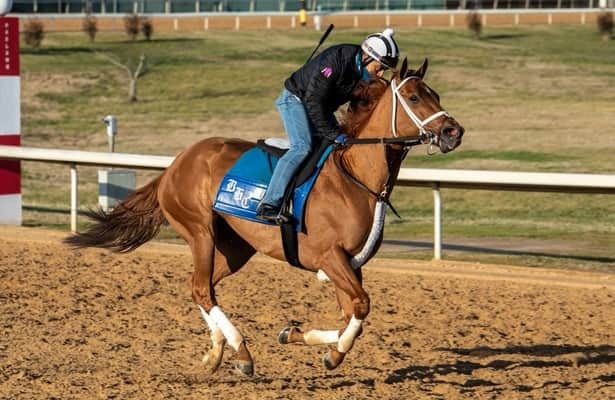 It was championship Thursday at Oaklawn as Eclipse Award-winning trainer Brad Cox sent his two Eclipse Award winners, Monomoy Girl and Essential Quality, to the track to train in preparation for weekend stakes engagements.

Cox said Monomoy Girl and unbeaten Essential Quality arrived at Oaklawn around 9 p.m. EST on Wednesday following a van ride of approximately eight hours from Fair Grounds, where both horses have been based this winter.

Essential Quality (3-for-3) will be making his first start since clinching an Eclipse Award as the country’s champion 2-year-old male in the Breeders’ Cup Juvenile on Nov. 6 at Keeneland. The gray son of super sire Tapit is the 3-2 program favorite for the Southwest, Oaklawn’s second of four Kentucky Derby points races. Essential Quality will break from the rail in the 1 1/16-mile race.

“Just see how it shakes out,” Cox said moments after watching Monomoy Girl gallop. “I’m sure there’s going to be some speed in there. We’ll see.”

The Southwest and Bayakoa were originally scheduled to be run Feb. 15 before being postponed twice because of severe winter weather. Cox said the delay didn’t affect Essential Quality’s preparation for the Southwest because he was able to breeze the colt five furlongs twice (Feb. 14 and Feb. 20) at Fair Grounds.

Monomoy Girl will be making her first start since winning the Breeders’ Cup Distaff on Nov. 7 at Keeneland. A winner of 13 of 15 career starts, Monomoy Girl was an Eclipse Award winner in 2018 (3-year-old filly) and 2020 (older dirt female). She drew the extreme outside, post 6, for the 1 1/16-mile Bayakoa, a major local prep for the $1 million Apple Blossom Handicap (G1) April 17.

“Monomoy Girl draws outside all the time, it seems,” Cox said. “Fourteen of fourteen in the (Kentucky) Oaks, 11 of 11 in the Breeders’ Cup at Churchill Downs.”

Cox said the Apple Blossom is the major spring objective for Monomoy Girl, who has never raced at Oaklawn.

Cox won his first Eclipse Award as the country’s outstanding trainer in 2020. He was Oaklawn’s third-leading trainer last year.