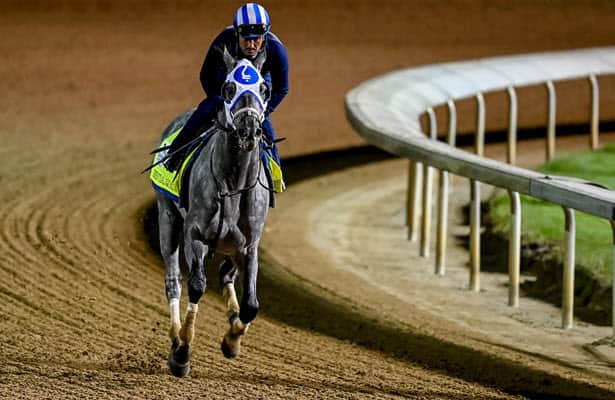 Godolphin homebred Essential Quality, last-out winner of the Belmont Stakes, breezed five-eighths in 1:01.81 on the Saratoga Race Course main track Saturday in preparation for the Grade 2, $600,000 Jim Dandy, a nine-furlong test for sophomores on July 28.

Trained by Brad Cox, the reigning champion 2-Year-Old, with regular rider Luis Saez up, worked from the half in company with 3-year-old New York-bred maiden winner Bingo John, who was piloted by Manny Franco.

“It was a solid move,” said Cox, the reigning Eclipse Award-winning trainer. “It looked like he stayed on well. We wanted to let him get a little blow out of this. He had a nice gallop out.”

The Tapit grey, out of the Elusive Quality mare Delightful Quality, has won 6-of-7 starts with purse earnings in excess of $3.2 million. A five-time graded stakes winner, Essential Quality captured the Breeders’ Futurity and Breeders’ Cup Juvenile at Keeneland in the final two starts of his 2-year-old campaign.

Following wins in the Southwest (G3) at Oaklawn in February and Blue Grass (G2) in April at Keeneland, Essential Quality finished fourth as the mutuel favorite in the Kentucky Derby.

Essential Quality was a decisive winner of the 12-furlong Belmont Stakes, outdueling Hot Rod Charlie, who will start in today’s Haskell (G1) at Monmouth Park, en route to a 1 1/4-length win.

The talented colt will look to become only the 11th horse to win the Jim Dandy-Travers double, with the Mid-Summer Derby, the $1.25 million Travers (G1), slated for Aug. 28 at Saratoga.

Cox said Essential Quality is thriving at Saratoga where he has posted two works over the main track, including a half-mile in 50.44 last week.

“We have another work to come, but so far I'm happy with how everything is going,” said Cox. “From what we saw this morning, he's doing very well.”

Shadwell Stable's Malathaat worked a half-mile in 48.05 on the Saratoga main track in company with last-out Mother Goose (G2)-winner Zaajel on Saturday in preparation for the Grade 1, $500,000 Coaching Club American Oaks, a nine-furlong test for sophomore fillies on July 24.

With Hall of Famer John Velazquez up for the 8:45 a.m breeze, Kentucky Oaks winner Malathaat worked outside of her Shadwell stablemate, maneuvering around a pair of workers at the top of the stretch and finishing up strong.

"She finished up excellent," said Hall of Fame trainer Todd Pletcher. "The work was very good, it was just unfortunate they got caught up with a couple horses but it worked out fine in the end."

Undefeated in five starts, Malathaat won the Kentucky Oaks last out on April 30 on the heels of a head score in the Ashland (G1) on April 3 at Keeneland.

Malathaat, by Curlin, is out of the Grade 1-winning A.P. Indy mare Dreaming of Julia.

Zaajel, by Street Sense, is out of the Daaher mare Asiya. The dark bay, who boasts a record of three wins from five starts, made the grade in January with a 1 1/4-length score in the Forward Gal (G3) at Gulfstream Park. Last out, in the 1 1/16-mile Mother Goose, Zaajel posted a 1 1/4-length win over Always Carina, despite being sent to post as the longest shot on the board at 18-1.

At 5:45 a.m. on the Saratoga main track, trainer Rob Atras sent out Grade 3 Gazelle runner-up Maracuja to breeze a half-mile in 49.98 in company with unraced 2-year-old Silipo.

With exercise rider Cristian Gaete up, Maracuja, who is also targeting the CCA Oaks, worked outside of her company, edging clear at the wire and galloping out in front through the turn.

“I caught her in 1:02 and change and out in 1:17,” Atras said. “I worked her a mile last week, so I didn't want her to do too much. She worked a half in company and then she went a half by herself after.”

Beach Haven Thoroughbreds’ Maracuja was expected to start in the Grade 2 Mother Goose before spiking a temperature. The Kentucky-bred daughter of Honor Code was clocked a half-mile in 49.25 at Belmont on July 4 ahead of her extended breeze on July 10, timed in 52.02 for four furlongs, both on the dirt training track.

“She didn't miss too much time,” Atras said. “We galloped her for a week and then gave her a half by herself before that move last week.

“She's going into the race good,” Atras continued. “I know it's going to be a tough race. I don't know if she can mess with that filly [Malathaat], she's pretty impressive. I've watched all of her races and she's a fighter, too. I'm not saying we can beat her, but if we run a good race, even if she comes second it would be a big accomplishment for her.”

Ricardo Santana, Jr. will pick up the mount from regular pilot Kendrick Carmouche, who continues to recover from a broken ankle.

Atras said he is hopeful the late-closing Maracuja will be a little closer to the pace after rallying up the rail to finish seventh last out in the Kentucky Oaks.

“I'm hoping we're not too far back whatever the pace is,” Atras said. “If we can get a good, sharp break and get in a decent position, we'll let her run her race.”

Owned by Dennis Narlinger and bred in the Empire State by JMJ Racing Stables, the speedy 5-year-old daughter of Freud captured the six-furlong Correction in March at Aqueduct ahead of a game second in the 6 1/2-furlong Vagrancy (G3) in May at Belmont Park. Last out, Sadie Lady made every pole a winning one in the Dancing Renee, traveling three-quarters on June 12 at Belmont.

Sadie Lady previously breezed a half-mile in 50.03 on July 5 and Atras said he gave the dark bay a little time between works.

“She worked a half 12 days ago and I’m not sure if she was a little sick after,” Atras said. “She was moving pretty good this morning. I told him to sit on her and let her do three and then gallop out a half and see how she is.”

Atras said he will consider entering Sadie Lady in the $200,000 Honorable Miss (G2), a six-furlong sprint for fillies and mares 3-years-old and up on July 28.

“She had nice a little three-out half here and hopefully we'll work again next week in preparation for that race,” Atras said. “I'm not sure if we'll go in or not. These races come up pretty tough in Saratoga and I don't want to put her in a spot where she can't compete.”