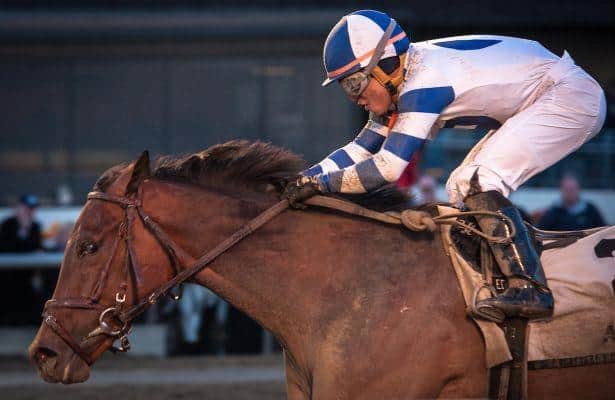 New York-bred Espresso Shot stepped up to open company and survived a stewards’ inquiry to win Saturday’s $250,000 Busher Invitational at Aqueduct. The Mission Impazible filly rushed late to pick up 50 points toward the May 3 Kentucky Oaks at Churchill Downs.

Espresso Shot, owned by NY Final Furlong Racing Stable, Maspeth Stables and Parkland Thoroughbreds, is trained by Jorge Abreu, a former assistant to Chad Brown before going out on his own more than two years ago.

Espresso Shot entered the Busher off a win in the Dec. 29 East View Stakes, restricted to New York-breds, and settled far back under jockey Eric Cancel. The compact field was first led by Excess Capacity, who set opening fractions in 23.51 and 46.58. Filly Joel took command before rounding the turn, but Espresso Shot made her move on the outside as Filly Joel faded and crossed the wire three-quarters of a length in front

"To be honest, I had a wonderful trip. I had it all planned out in my mind," Cancel said. "I mean, it worked very well. The filly broke there with them. I was just trying to get her to a comfortable position, where we were both happy. I did have the trip, once I started getting closer to the three-eighths, I just swung her out a little bit, and just let her cruise around. Once I got to the quarter pole, it was 'let's go.'

"I was very confident. Jorge Abreu knows what he's doing; he does a good job. She's a very talented filly. I didn't have any doubt that I had a shot to win the race."

Oxy Lady, who won the Tempted Stakes (G3) at Aqueduct in November, crossed the wire second under Javier Castellano. A trainer’s objection from Jack Sisterson claimed interference against the winner, but Espresso Shot's number remained up.

"She put in a good effort," Castellano said of Oxy Lady. "I maybe could have won the race, but the 10-horse [Please Flatter Me] was hit left-handed [by jockey Alex Cintron] and came over and bumped some of the other horses in between. I got the worse of it in that case. But it's nothing you can control.

"She has a lot of talent. That's the way she's supposed to run; off the pace. I liked the way she finished today."

Oxy Lady, Orra Moor and Please Flatter Me picked up the last of the Oaks points on a 20-10-5 scale.

It was the third win in six starts for Espresso Shot, who increased her earnings to $262,975.

"We were all in the winner's circle here and we were jumping up and down," Zanatta said. "To have her come wide and be six or seven lengths off of it, it was the best way to win a graded stakes race. It was fantastic."