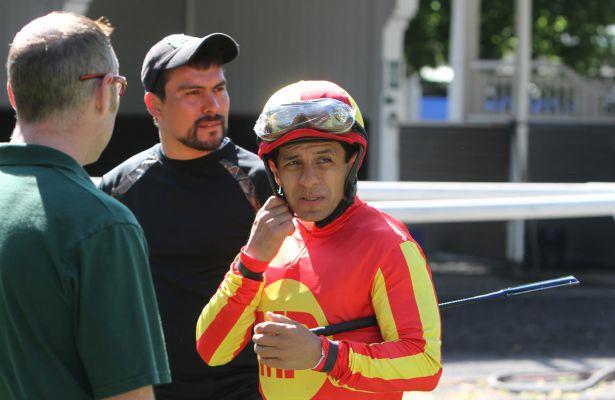 On Friday, Triple Crown-winning jockey Victor Espinoza took off all mounts at Del Mar after testing positive for coronavirus, which was first reported in the Daily Racing Form late Friday. He is the fourth jockey to test positive in recent days.

Previously on Wednesday, it was announced that jockey Martin Garcia tested positive prior to riding at Indiana Grand.

And last Sunday, the DRF reported that jockey Gerard Melancon tested positive. He last rode at Lone Star Park on June 28. Also, on Sunday, July 5, Lone Star Park had an employee test positive for coronavirus, which prompted cancellation of the races that day and at least this week.

One commonality between Espinoza, Saez and Garcia, is they all rode at Los Alamitos on Saturday, July 4. Saez and Garcia have traveled to several tracks across the country in recent days, while Espinoza has not left Southern California.

Here are where the four jockeys have ridden most recently:

Martin Garcia
Garcia has traveled to several tracks acros the country for stakes races in recent days, including winning the $200,000 Great Lady M. (G3, Sneaking Out) on the Los Alamitos Derby day card (7/4), winning the $100,000 Iowa Derby (Acre) and the $100,000 Cornhusker (G3, Night Ops) at Prairie Meadows (7/5), and was scheduled to ride Miss T Too in the Indiana Oaks before taking off mounts.

Luis Saez
Saez traveled out west, winning the Los Alamitos Derby aboard Uncle Chuck for trainer Bob Baffert, and went back to the Midwest to ride Extraordinary, who was fifth in the Indiana Derby (7/8).

Gerard Melancon
Melancon has not ridden since June 28 at Lone Star Park, but did not test positive until July 3, as reported by DRF.