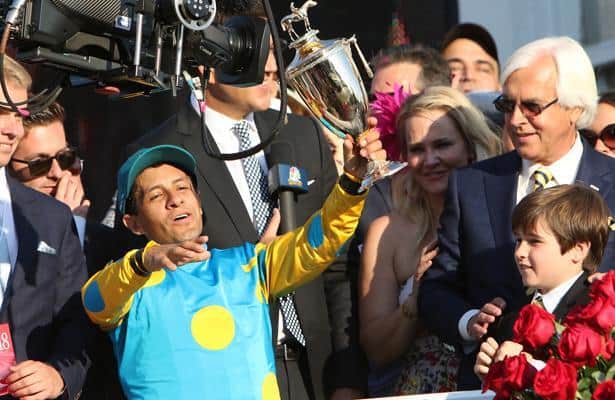 Victor Espinoza leaves on Monday, June 1, for New York and what he hopes is a date with destiny when he pursues the Triple Crown aboard American Pharoah in the Belmont Stakes on June 6.

This will mark the second time in two years and the third time in his career he will try for the elusive Triple, having missed out on War Emblem in 2002 and California Chrome last year.

Usually readily accessible, this time around the indefatigable rider is attempting to maintain a relatively low profile with PR functions and accommodating the media, focusing as he should on the target at hand, winning the Triple Crown, which has not been won since 1978.

“Yesterday,” Victor said at Clockers’ Corner Friday morning, “I did so many interviews, I was tired.”

Espinoza and his agent, Brian Beach, will make certain Victor is a “fresh horse” going into the Belmont, leaving that same objective for American Pharoah up to the colt’s trainer, Bob Baffert, who will be seeking the Triple Crown for the fourth time. He came close with War Emblem, Silver Charm (1997) and Real Quiet (1998).

Told American Pharoah looked he was floating over Pimlico’s inundated sloppy track en route to his seven-length romp in the Preakness last Saturday, Victor was quick to respond. “Me too,” he said, laughing. “I was floating, too. My boots were full of water.

“It’s amazing how life is. I never thought I would win three Kentucky Derbies. After I won the first (on War Emblem in 2002), four or five years went by and I never dreamed I’d go back again, and then last year here comes California Chrome, the favorite for the Kentucky Derby, who won by daylight and came very close to winning the Triple Crown.

“Now we’re in position to do it again in a back-to-back situation with an amazing horse like American Pharoah. But let me tell you about the Preakness. I never rode a horse in my life in so much rain. That was my first time.

“But it was fun. Pharoah handled it very well. I was more concerned about the horse but he ran an unbelievable race and I’m here again. You never know what lies ahead or what the future holds.

“But I never get too caught up in the moment. I just keep working on my career, doing things normally, taking it one day at a time.”

As to the Belmont, Espinoza understandably feels “confident” about American Pharoah.

“I can’t look back and worry about the two times I lost the Belmont,” Espinoza said. “When I rode War Emblem, he stumbled really bad at the start and that was it. My chance was gone right away.

“California Chrome was tired going into the race and his energy wasn’t quite what it was. Also, another horse stepped on his foot and that happens when a horse doesn’t have the energy it should. They do things in slow motion, and that’s what happened.

“So again my chances went when the gates opened. Twice my chances were eliminated like that. But it’s different this time with American Pharoah. I know each horse is different and every time I’m there, I think differently, too.

“It’s all going to depend on Baffert and if he has the horse ready. Baffert knows how to train a horse to be ready for the Belmont, so that gives me a lot of confidence, as it does with other horses I ride in big races like this.

“If the trainer has his horse ready, then my job is easy. After that, I have all the confidence in the world.”

Espinoza celebrates his 43rd birthday tomorrow, but would patiently wait two weeks to receive a gift for the man who has everything.

“The Triple Crown,” he said. “That’s the present I need.”