Espinoza: Chrome 'Basically Better Than Before' 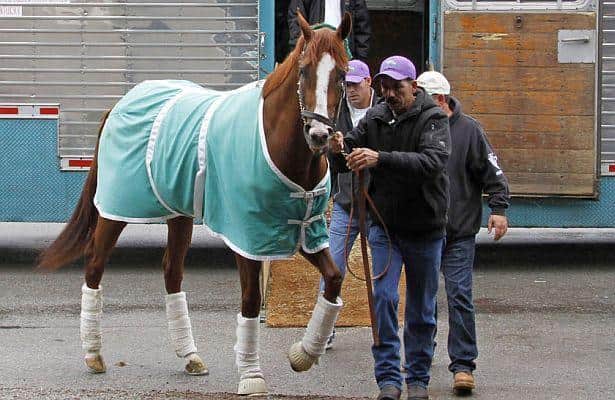 Art Sherman not only trains California Chrome, he’s also a fan. Like the rest f the racing world, Sherman, who turns 78 on Feb. 17, is looking forward to Feb. 7, when the one-three-four finishers in the Breeders’ Cup Classic—Bayern, California Chrome and Shared Belief—could meet in the Grade II, $500,000 San Antonio Stakes at Santa Anita.

Towards that goal, California Chrome worked six furlongs at his Los Alamitos base Saturday in 1:12.60 under regular rider Victor Espinoza.

“He worked unbelievable,” Espinoza said. “He went in one twelve and change which is what I wanted from him. He was pulling a lot. He’s getting tougher; he’s on his toes right now. He’s basically better than before.

“He has completely changed as he’s getting older. As a 4-year-old, he’s going to be a different horse. He works differently. Yesterday was the slowest I could go. He’s pulling hard, which he never used to do. He’s tough.

“He’s building back up big time physically. He tries to jump around and bite the pony every chance he gets and I believe in 2015 he’ll run the best races of his life . . . He’s an amazing horse and he did unbelievable things in 2014 but I’m really looking forward to 2015.”

“We’ve got a lot of things going on,” said Sherman, who sent out Well Maybe to a neck victory in Saturday’s second race at 40-1 under Joe Talamo for owner Dr. Ed Allred, President and Chairman of the Board of Los Alamitos Race Course.

“Next Saturday,” Sherman said, “we’ve got the Secretariat Award" (fifth annual Vox Populi Award at Santa Anita. It starts at 11 a.m. in Santa Anita’s East Paddock Gardens, where Sherman, jockey Victor Espinoza and owners/breeders Steve Coburn and Perry Martin will be available to sign autographs for the first 2,000 fans attending the session, while supplies last).

“Then,” Sherman said, “we’ve got the California-bred awards in February, and we’re going for the Eclipse Awards on Jan. 17. We’ve got a lot of action going on.”

As for California Chrome’s action on the track, Sherman couldn’t be more pleased.

“He looks really good right now,” Sherman said of the California-bred son of Lucky Pulpit. “It will be nice if all three horses can hook up in the San Antonio. I think they will. I’ve got a good feeling about it.”