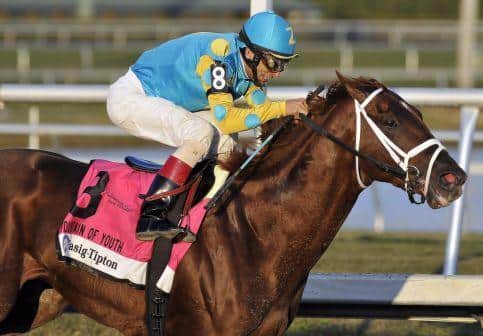 Zayat Stable’s Eskendereya, 8 ½ lengths winner of the Fasig-Tipton Fountain of Youth Stakes (G2) at Gulfstream Park on Feb. 20, is among 92 3-year-olds nominated for the $750,000 Florida Derby (G1) to be run at 1 1/8 miles on Sat., Mar. 20, and trainer Todd Pletcher has confirmed it is the next logical start for his promising colt.

Eskendereya’s tour de force victory in the Fountain of Youth under regular rider John Velazquez sent him soaring in most Top 10 Kentucky Derby contender rankings nationwide and will be a solid favorite if he goes to the post. The son of Giant’s Causeway is one of more than a dozen of the nominees from the Pletcher arsenal and had won a one-mile allowance over the track prior to the Fountain of Youth.

Two contenders listed for the Swale include Paul Pompa, Jr.’s D’Funnybone, winner of the Saratoga Special (G2) and The Futurity (G2) at Belmont Park last year and the Hutcheson Stakes (G2) over the track and distance earlier this meet for trainer Rick Dutrow; and Edward P. Evans’ A Little Warm, winner of the Spectacular Bid Stakes in early January and runner-up in the Hutcheson for trainer Anthony Dutrow.

The Rampart is the biggest prize of the winter season for older fillies and mares on the main track with nominees including Donver Stable’s Careless Jewel, winner of five straight last year including the Alabama Stakes (G1) at Saratoga by 11 lengths for trainer Josie Carroll; and West Point Thoroughbreds’ Justwhistledixie, winner of the Bonnie Miss over the track and distance last year.

Completing the stakes line-up for Florida Derby day will be the Appleton with J. Mack Robinson’s Cherokee Artist and Farnsworth Stable’s Jet Propulsion prominent on the roster after finishing second and third last out, respectively, behind Dubai-bound Courageous Cat in the Canadian Turf Stakes (G3) here on Feb. 20.

Edgewood Farm’s 4-year-old colt Forgotten Dynasty has only run twice, one year apart at Gulfsteam Park, but has shown enough to likely earn the favorite’s role in Friday’s ‘a other than’ allowance feature going one mile on turf with jockey John Velazquez named to ride for trainer Seth Benzel.

Forgotten Dynasty is a son of Dynaformer purchased for $150,000 at the Keeneland September yearling sales. He finished a close-up third in his career debut over the Gulfstream course on Feb. 13 last year for trainer Kiaran McLaughlin, and almost exactly a year later on Feb. 11, broke his maiden going a mile with Velazquez aboard in his first start for Benzel.

Another contender that will attract support in Friday’s feature is Santa Cruz Ranch’s 4-year-old homebred colt Stay Red, who ran well in four turf starts before breaking his maiden at Calder on the main track last out at Calder on May 30 for trainer Juan Rizo. The son of Red Bullet is out of Stay Forever, a multiple stakes-winner whose victories included the Sunshine Millions Filly & Mare Turf here in 2003.

Friday’s race attracted a field of 12 older horses, three of them entered for ‘main track only’ by their connections, notably Estate of Edmund Gann’s 4-year-old Causeway Kin with Elvis Trujillo named to ride for trainer Marty Wolfson. The son of Giant’s Causeway is a half-brother to Graded stakes-placed stablemate You and I Forever and was impressive breaking his maiden going a mile here on Jan. 16 last out.