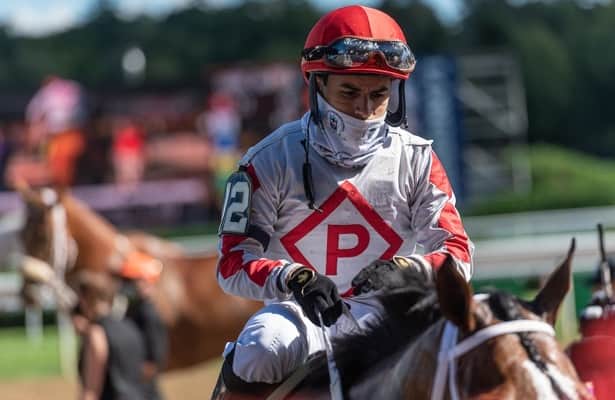 Eric Cancel had a big day at on sloppy Aqueduct track Sunday, winning six races and finishing in the money in all eight starts to clinch his first career New York Racing Association riding title.

“I’m filled with emotions," Cancel said. "I worked very hard for this and being able to compete with a guy like Kendrick (Carmouche, who will finish second in the jockey standings), who is a very hard-riding guy, it feels wonderful. Yesterday, I didn’t think I was going to get it. But today, I just woke up and said to keep on swinging and go for it. I want to thank my agent and all the owners and trainers who gave me the opportunity to be here and win this meet."

Cancel got off to a good start in the first race, piloting Sono Grato to a maiden win.

After finishing second in the second race, he came back to score by a neck with Lobsta in an allowance optional claiming race.

The fourth race brought another maiden winner in Kith, and in the fifth race, it was a 6 1/2-length claiming victory aboard City Temper. The sixth race brought an allowance win on Make Mischief, and Cancel won the seventh race, the Haynesfield, by a neck aboard My Boy Tate.

But Cancel could not make it a record seven wins on the day, coming in third in the nightcap.

This was the 23rd time a jockey has won six races in one day at a NYRA track and the 15th time at Aqueduct. Dylan Davis was the most recent jockey with the accomplishment, with six wins in nine starts twice in February 2018.

Fans on Twitter were quick to congratulate Cancel, who began racing in 2015.

Big congratulations to Eric Cancel on winning his first riding title at Aqueduct! We enjoyed teaming up with you for 15 of our 26 winners this meet. pic.twitter.com/SPhcUaS1Nd

It's @Ericcancel18's world and we're all just living in it!!! SIX WINS TODAY AT AQUEDUCT! He takes the Haynesfield in style with My Boy Tate ?? pic.twitter.com/P8Xdjidokz

Eric Cancel putting on all-time clutch performance on a closing day of a meet.