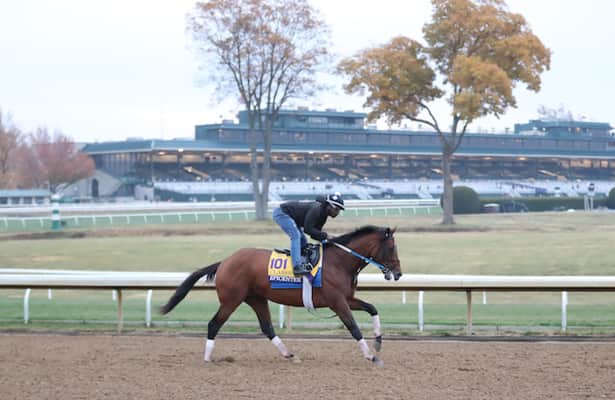 Grade 1 Travers Stakes winner Epicenter, who suffered a career-ending injury in the Breeders’ Cup Classic, is making a good recovery and will stand at Coolmore’s Ashford Stud for 2023 at a fee of $45,000.

The son of Not This Time led the sophomore division in the winter and early spring following victories in the Gun Runner Stakes, the Risen Star Stakes (G2) and the Louisiana Derby (G2).

Sent off favorite for the first two legs of the Triple Crown, he finished second on both occasions. Skipping the Belmont Stakes with an eye on the Travers, Epicenter was next seen in the Jim Dandy (G2), where he powered home to victory off a 10-week break.

In the Travers the following month, Epicenter scored by 5 1/4 lengths against multiple Grade 1 winner Cyberknife and cemented his position at the time atop the 3-year-old male division. His Beyer Speed Figure of 112, according to Daily Racing Form, was the highest of any of his generation on dirt this year.

“Epicenter was solid all year, and the Travers was the breakout performance he needed and deserved, and he did it in an emphatic way,” trainer Steve Asmussen said. “He put everything together on a grand stage.”

“He was a brilliant horse whose best racing days were still in front of him,” said owner Ron Winchell, who raced the colt. “Bred on the reverse of Gun Runner’s Candy Ride-Giant’s Causeway cross, he’s a hugely exciting stallion prospect.”

“Epicenter is the best son of Giant’s Causeway’s best sire son Not This Time and is out of a stakes winner by the sire of Gun Runner,” Coolmore’s Dermot Ryan said. “His combination of speed and stamina made him a potent force, and he’s a very good-looking horse to boot. Breeders are going to love him.”