Epicenter is 'perfect' in final tuneup for Kentucky Derby 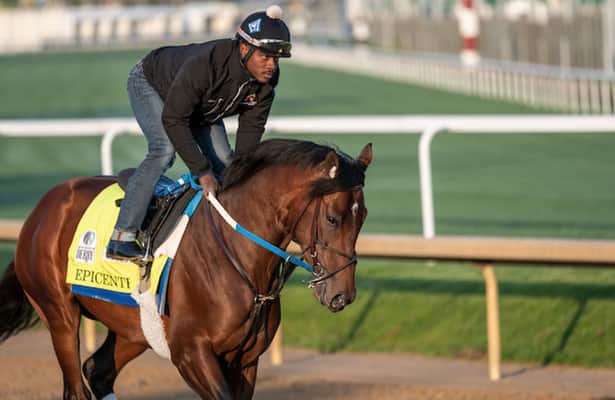 The Sunday morning drive from Lexington, Ky., to Churchill Downs in Louisville has become routine for David Fiske the last four weeks as the longtime manager of Winchell Thoroughbreds has watched multiple graded-stakes winner Epicenter go through his paces in preparation for the May 7 Kentucky Derby.

Another thing that has become standard for Fiske over the last month is what he has seen from the Louisiana Derby (G2) winner as he readies for the biggest test of his young life.

“He is a machine. All his works look the same,” Fiske said. “I’ve been here for a month of Sundays and each one, if you put them on a screen together, you couldn’t tell one from another. He just knocks them out.”

[Asmussen reflects on his career and his Kentucky Derby quest]

In his final major workout in advance of the first leg of the Triple Crown, it was indeed business as usual for Epicenter as the Winchell Thoroughbreds color bearer put in a stout five-furlong breeze in 1:01 beneath the Twin Spires on Sunday.

With rain soaking the track overnight, trainer Asmussen opted to push the works for both Epicenter and leading Kentucky Oaks contender Echo Zulu back a few hours to let the surface dry out. Coming out at 7:30 a.m. EDT during the special training period reserved for Oaks and Derby hopefuls, Epicenter broke off inside of stablemate Alejandro, clocking splits of 12.60, 24.40, 36.20 and 48.40 seconds before galloping out with energy to spare in 1:13.80.

“For what we were looking to do with him, it just felt perfect,” said Asmussen, North America’s all-time winningest Thoroughbred trainer. “I think that he's in a beautiful rhythm and we're trying to create the circumstances to prepare for what we're expecting to happen in the races this weekend. Honestly, we have so much confidence in Epicenter right now. He has taken a lot of training extremely easy. I thought he took the Louisiana Derby extremely easy, how he came back. That's why his training or his works ever since have been faster or stronger than is the norm for me.”

Epicenter led every point of call during his win in the Feb. 19 Risen Star Stakes (G2) at Fair Grounds, but the son of Not This Time showed during his Louisiana Derby triumph he could be just as effective rating in the first flight and then pouncing. The bay colt is aiming to give both Asmussen and owner Ron Winchell their first victories in the Kentucky Derby.

“Clearly he’s the best chance we’ve had that we’ve brought over here,” Fiske said. “If you look at all the hypothetical morning lines, he’s been the future book favorite for a month. So yeah, we’ve never had one of those.”

Winchell and Asmussen have teamed up for two prior victories in the Kentucky Oaks with Summerly (2005) and Untapable (2014). Unbeaten Echo Zulu will aim to add to that bounty on Friday, and the champion filly was allowed to go as she pleased during an easy half-mile breeze in :50.80 just after 9 a.m. on Sunday.

Owned by Winchell in partnership with L and N Racing, Echo Zulu was unbeaten in four starts during her championship 2-year-old campaign, including a victory in the Breeders’ Cup Juvenile Fillies last November at Del Mar. The daughter of Gun Runner is coming into the Kentucky Oaks having won the Fair Grounds Oaks (G2) by a nose in her seasonal bow on March 26.

“Obviously, very different works for the two of them today,” Asmussen said of Epicenter and Echo Zulu. “I felt (Echo Zulu) won the Fair Grounds Oaks on natural ability and class, and she has trained for the Oaks. She has put in solid training and had a huge move last Sunday. I just felt that we’re there, so we went for her typical easy half mile. I want her as razor sharp and fleet as she can be for Friday.

“I'm unbelievably excited to be doing this well with this much on the line.”