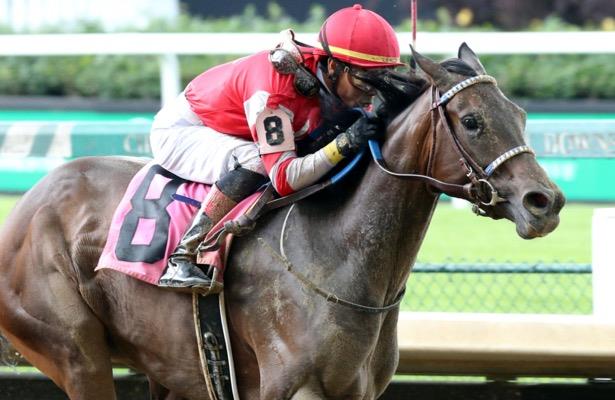 Trainer Kenny McPeek has three of the eight horses entered for the Grade 3, $100,000 Remington Park Oaks on Sunday, including the heavy 7-5 morning-line favorite Envoutante.

The Remington Park Oaks tops the undercard on Oklahoma Derby Day this Sunday. The Oaks is slated as race four with an approximate post time of 4:24 p.m. CDT.

McPeek is looking for his second victory in this race, having won the 2013 edition with Montana Native. His other two entrants also certainly have a shot Sunday with Jeweled Princess at 4-1 and Curls and Bows at 6-1. That gives him three of the top four favorites in this field.

The top trainer in the country by money earned this year with more than $14 million banked, Steve Asmussen has won this race four times, including in the last two years. Asmussen, a Hall of Famer nationally and in Oklahoma, won last year with Lady Apple and in 2018 with She’s a Julie. He has made two more trips to the winner’s circle with More Than Promised in 2005 and Carlitta in 1999. Asmussen entered Seattle Slang this year and she was made 8-1 in the morning line.

Here’s a look from the rail out on the eight fillies going to the gate in the 31st Remington Park Oaks at 1 1/16 miles:

This Kentucky-bred filly by Orb, out of the Giant’s Causeway mare Venetian Causeway, will carry the hometown flag as all three of her wins have come at Remington Park. She has won three-of-four tries in Oklahoma City, including a win in the E.L. Gaylord Memorial Stakes, sprinting 6 1/2 furlongs Sept. 29, 2019. She broke her maiden the race before that at Remington and returned to her favorite track with a win in her 2020 fall debut against conditioned allowance fillies and mares just eight days before the Oaks, Sept. 19. Her only loss over this main track came in the Trapeze last year, finishing fourth. She has three wins in eight starts for earnings of $101,283. Career mark of 8: 3-2-0.

This Kentucky-bred filly by Tapit, out of the Quiet American mare Seattle Smooth, is making her first career stakes start after winning a maiden race at Fair Grounds in New Orleans on March 14. She also won her last race, an allowance for non-winners of two races lifetime at Ellis Park in Henderson, Ky. on July 25. She hasn’t raced since then but has had a series of works over Remington Park’s main surface, including a bullet move at five furlongs Sept. 14. She was the fastest at that distance of 15 horses that worked that morning. Earnings of $77,050. Career mark of 7: 2-0-2.

This Kentucky-bred daughter of two-time Horse of the Year Curlin, out of the Peteski mare Trickski, has only won twice in her career, but the victories have come in her last two starts in Kentucky. She broke her maiden at Keeneland in Lexington, Ky., two races back July 12, sprinting six furlongs. McPeek stretched her out to a mile in her last race at Ellis Park in a first-level allowance race Aug. 21 and she just got up at the wire to win. Unraced since, she has taken to the track at Churchill Downs in Louisville to prep for this, her first stakes try. Career mark of 8: 2-0-0 for $56,603 in earnings.

Kentucky-bred daughter of Uncle Mo has top money earnings in the field with $155,748. This filly, out of the Bluegrass Cat mare Enchante, has won two of seven starts lifetime. She won against maidens at the Oaks distance at Gulfstream Park, romping by an open six lengths in wire-to-wire fashion. She then beat first-level allowance fillies easily at Churchill Downs in Louisville, Ky., coming home by 2 1/4 lengths. Her connections thought enough of her following that race to try her against Speech in the Ashland Stakes (G1) at Keeneland in July and against Swiss Skydiver in the Alabama Stakes (G1) at Saratoga in upstate New York in August. She finished a respectable third and fourth, respectively, in those races. Career mark of 7: 2-1-2.

Another filly that gets into this race on a two-win streak. She won a six-furlong sprint at Prairie Meadows in Iowa on Aug. 13 against an allowance field of non-winners of two lifetime and then an allowance optional claiming race for fillies last time out in Iowa, stretching out to a mile. She won both races by daylight – 4 3/4 lengths and 4 1/2 lengths. She has run first or second in seven of her nine starts lifetime and will be making her stakes debut in this spot. Career mark of 9: 3-4-1 with earnings of $70,393.

Owner: Elie and Lori Feghali, and Kimberly and Mark Mathiesen

A Kentucky-bred filly by Take Charge Indy, out of the Milwaukee Brew mare Forbidden Brew, is third choice on the morning line at 9-2 odds and has hit the board in seven of nine tries. She is stakes-experienced, running in that kind of company in her last three starts while earning a paycheck in all three attempts. She finished fourth in the Saint Ysabel Stakes (G3) at Santa Anita in Arcadia, Calif., at 1 1/16 miles on March 8, third in the Cal Oaks in Northern California at Golden Gate on May 31, and third in the Torrey Pines Stakes (G3) at Del Mar near San Diego on Aug. 22. Her career mark is 9: 2-1-4 for $94,540 in her bankroll.

Stuart, a mainstay at Remington Park throughout the track’s history, enters this filly by Flat Out from the Dayjur mare Alacazar while seeking his second victory in the Remington Park Oaks. He saddled standout War Thief to win the 1995 Oaks, when it was contested at 1 1/16 miles over the turf. Hotasapistol has made eight starts in her career, three as a juvenile and five this summer, all in Minnesota-bred company at Canterbury Park in Shakopee, Minn. The winner of the Minnesota Oaks on Aug. 19, Hotasapistol put in her first local work for the Remington Park Oaks on Monday, Sept. 21. She went a half-mile in :49.72, handily, on a fast track. Her career mark is 8: 3-1-1 for $123,985 in earnings.

Jeweled Princess rides into the Remington Park Oaks on a three-race win streak, at three different tracks. Her first win in the streak came at Keeneland on a sloppy track, going 1-1/16 miles against maiden claimers, winning by 1 1/2 lengths July 9. She followed that with a one-length victory at Ellis Park in the mud against allowance optional claimers July 31, and then took a little time off before winning Sept. 4 at Churchill Downs against conditional allowance optional claiming horses. She has not won or raced in stakes company yet. Her career mark is 10: 2-3-2 for $112,888 in earnings.