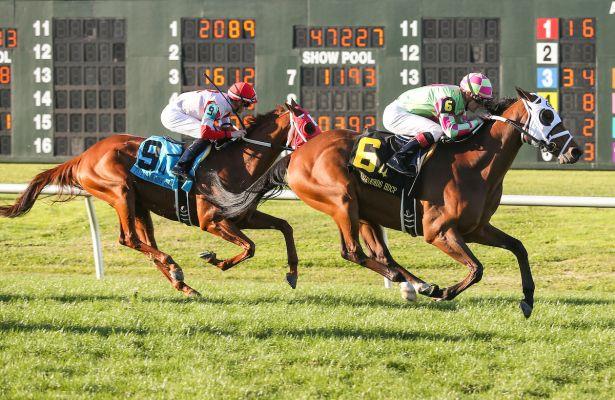 Ridden by Julien Leparoux, Maxis Stable’s Enterprising tracked his Kenneth and Sarah Ramsey-owned stablemate Oscar Nominated through splits of 23.98, 49.83 and 1:13.84 before mounting a challenge at the top of the lane. After drawing alongside that rival, ridden by Florent Geroux, the pair dueled through the lane, but the eventual winner refused to relinquish the advantage, crossing the wire a three-quarter-length winner in a final time of 1:48.80. It was another length back to Hillerich Racing and owner-trainer Bernie Flint’s One Mean Man in third under Mario Gutierrez.

“My horse was game and he fought all the way,” Leparoux said. “Mike told me to get him into the race because he can be a bit lazy. There was a slow half, but I got him into the race. At the quarter-pole, I tried to get a jump on him. From there it was straight on home.”

“A very attractive horse and was another turf horse who looked like he would appreciate more ground,” Maker remarked. “He’s a Florida-bred and they have a lot of nice Florida-bred stakes. We will most likely send him to a state-bred stakes at Tampa, but we’ll discuss it with the owner. I thought Oscar Nominated ran really well. Granny’s Kitten was kind of puzzling to me, but I’m happy overall with the race.”

“There was no speed in the race,” Geroux said. “If there was more speed, I would have taken him off the pace, but Julien stayed off of me long enough for me to get the jump on him.”

“It was a good trip,” Gutierrez said. “I wish I would have known the horse a bit better. He’s a clever horse, and I think he could have run a little bit better if I had let him make the lead and take the challenges as they come, because when he feels pressure, he pushes himself more.”

Earlier in the card, Richard Klein and Bertram Klein’s Louisiana-bred Believe in Bertie set her second track record of the season in New Orleans when posting a half-length victory in the $75,000 Daisy Devine Stakes over 1 1/16 miles on the Stall-Wilson turf course.

The Brad Cox-trained 4-year-old daughter of Langfuhr broke her first track record of the season with an emphatic gate-to-wire victory in the Pago Hop Stakes in December, and she was quickly sent on her way in similar fashion by rider Shaun Bridgmohan in the Daisy Devine. Setting early splits of 23.56, 47.36 and 1:10.66, she completed the trip in 1:40.31 to lower the course record. Her nearest pursuer in the early stages, Winter Quarter Farm’s Tom Proctor-trained Cambodia, settled two lengths behind but was unable to keep pace under Florent Geroux and was ultimately outrun by a neck by Kenneth and Sarah Ramsey’s Mike Maker-trained Kitten’s Roar for second. Miguel Mena, who was aboard for Kitten’s Roar’s victory in last month’s Marie G. Krantz Memorial, had the return call Saturday.

She’s a fast filly and very talented. It’s great that a Louisiana-bred loves running at the Fair Grounds,” Cox said after earning his 600th lifetime win. “It’s a nice accomplishment [600 wins], especially in a stakes. Now we’ll focus on 700. I think she’s a graded stakes filly and I’ve said that in the past. I continue to believe in her. I am not sure she wants to go much farther than a mile. She has one speed and it’s ‘fast’. She takes that as far as she can. Shaun has figured her out and you just have to get along with her and be a good passenger.”

Two races prior to Believe in Bertie stamping herself as a fast filly to watch in the future, William Stiritz’s Hogy had already provided racing fans a reminder not to forget about the hard-knocking veterans of the game in the $60,000 Colonel Power Overnight at 5½-furlongs on the Stall-Wilson turf course.

"Scott Becker put me back on the horse and it was great to ride him again,” Geroux said. “He's not an easy horse to ride. The key with him is timing the ride and going outside because he will pull himself up. I knew there was a bit of magic left in him. I'm not surprised about the new track record."

“A nice horse beat us,” said Robby Albarado, who rode Green Mask. “We went pretty fast, and I was hoping my target [Latent Revenge] would stay in front of me a little further; I didn’t want to underestimate him so I tackled him a little earlier than I needed to. He still ran hard and that was a track record.”