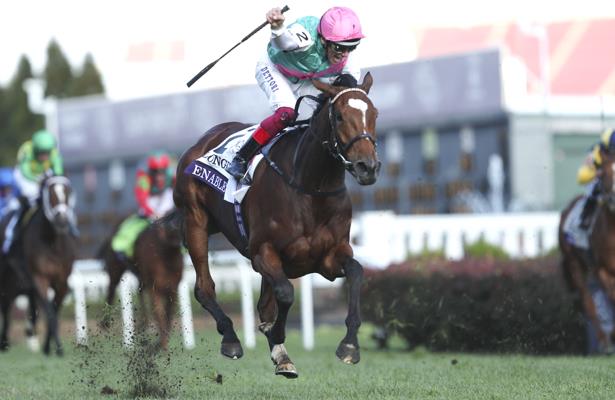 Enable's lone domestic run in Saturday's Breeders' Cup Turf may have put her on the map for an Eclipse Award as the 4-year-old John Gosden trainee jumped to No. 5 in the final edition of the NTRA Top Thoroughbred Poll.

Sistercharlie figures to win the Eclipse Award for Champion Female Turf horse, but Enable could make it close. Enable also received a trio of first-place vote, the only horse other than Accelerate (24) and Justify (19) to get top billing on any voters' polls.

In terms of the Horse of the Year race, this week’s voting results marked the first time this year that Accelerate has received more first place votes than Justify and also marked Accelerate’s 12th consecutive week in first place. Since the advent of the Eclipse Awards in 1971, four other Triple Crown winners — Secretariat, 1973; Seattle Slew, 1977; Affirmed, 1978; and American Pharoah, 2015 — each received the gold Eclipse Award statue symbolic of Horse of Year as 3-year-olds.

City of Light, Roy H, Game Winner, Newspaperofrecord and Yoshida rounded out the Top 10. Yoshida was the only one of 10 horses ranked that did not win a Breeders' Cup race. He was fourth in the Classic.

The NTRA Top Thoroughbred Poll is billed as the sport’s most comprehensive survey of experts. Every week eligible journalists and broadcasters -- most of whom also vote for the Eclipse Awards -- cast ballots weekly for their Top 10 horses, with points awarded on a 10-9-8-7-6-5-4-3-2-1 basis. All horses that have raced in the U.S., are in training in the U.S., or are known to be pointing to a major event in the U.S. are eligible.

Click here for a full accounting of Top 10 votes by voter.