Enable has been retired to end her historic championship career 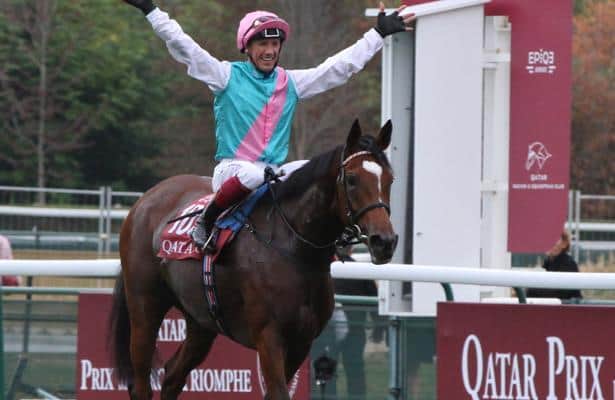 She took us on a ride that started with a forgettable Monday race in the English fall of 2016 and ended almost as quietly this month at an opulent French racetrack eerily hushed by the pandemic.

In between Enable provided a joyful noise for all of racing, winning 11 Group or Grade 1s in England, Ireland, France and the U.S., including the 2018 Breeders’ Cup Turf in front of more than 70,000 screaming fans at Churchill Downs.

Her exit was calmly punctuated early Monday, when Juddmonte Farms announced that the star 6-year-old mare had been retired to begin her breeding career next spring.

“After consulting her trainer John Gosden and his racing manager Teddy Grimthorpe, Prince Khalid has decided that Enable will be retired from racing and will now join the Juddmonte broodmare band to be covered by Kingman in 2021,” CEO Douglas Erskine Crum said in a written statement.

Thus ends a career that included a record three victories in the King George VI & Queen Elizabeth Stakes (G1) and a record-tying two in the Prix de l’Arc de Triomphe (G1), Europe’s richest race. Her nearly $14 million in earnings are the most ever for a horse based in Europe. She won five Cartier Awards, including two as the continent’s horse of the year in 2017 and 2019.

“She has brought so much joy to everyone who has been involved with her,” Grimthorpe said. “Her elegance and forceful personality have been nurtured by John and his team at Clarehaven, especially by Imran (Shawani, the groom) who has looked after her with such calm and devotion.”

The announcement squelched rising hopes that Enable might take one last shot Saturday at Ascot in the British Champions Fillies and Mares Stakes (G1), in which British bookmakers made her a 3-2 favorite before Monday’s announcement.

Sired by Nathaniel, himself a King George winner, Enable broke her maiden on the synthetic track at Newcastle four years ago next month in her only race as a 2-year-old. After she lost her first start as a 3-year-old, she would be united with jockey Frankie Dettori for the rest of her racing career.

“She is by far the best horse in terms of (résumés) that I’ve ever ridden,” he told British reporters last month. “Everyone knows my heart belongs to Enable. I love her.”

Dettori and Enable were undefeated in their six races together in 2017. She got her first of five Oaks wins, doing so in record time at Epsom. She added the Irish and Yorkshire Oaks on either side of her first King George victory, which was also her first group race against males. Her second came in her 3-year-old finale at Chantilly, where she won her first Arc.

Her 2018 season was delayed until September because of surgery to repair a burst blood vessel behind a knee. Then Enable spiked a fever after her comeback victory in a modest Group 3 race, so she was not 100 percent coming into the Arc at ParisLongchamp. She still held on to win.

“The last 100 meters I had a feeling of complete terror and fright,” Gosden said that day. “She and Frankie won it on knowledge and sheer guts.”

Enable was in much better shape the following month, when she became the first horse to win the Arc and a Breeders’ Cup race in the same year. She had much more energy pulling away from a late challenge by Magical, the Coolmore filly who finished behind her all five times they met.

In 2019 Enable ran her winning streak to 12 and was a 1-2 favorite to become the first horse to pull off a three-peat in the Arc. But the ground came up very soft, and that cost her as she was caught in the last 50 yards by 13-1 long shot Waldgeist.

Nine days later Grimthorpe surprised everyone who believed Enable had run her last race by saying she would come back at age 6 and target the Arc again.

After finishing second to Ghaiyyath in the Eclipse Stakes, she won her third King George and then scored on the synthetic track at Kempton in the September Stakes, the same Group 3 race that she won in her 2018 comeback. That turned out to be her last victory.

Even softer ground than 2019 conspired against Enable in this month’s Arc, where she finished sixth. It was the only time that she failed to finish in the money during a career in which her final record was 19: 15-2-1.

“Her (résumé) withstands the closest of inspections,” Grimthorpe said. “Very few can match what she has given to racing.”

Enable’s first stallion partner, Kingman, was a four-time Group 1 winner at a mile before he was retired at age 3 with a throat infection. At the time in 2014, Gosden called him “the most exciting horse I’ve ever trained.” Among his progeny is Palace Pier, the futures favorite for next month’s Breeders’ Cup Mile.

“I did have a cry,” Dettori told Racing Post when he found out about Enable’s retirement. “But more of joy than sadness because of all the great memories she gave me.”