Mo Donegal, Emmanuel will meet in Fountain of Youth showdown 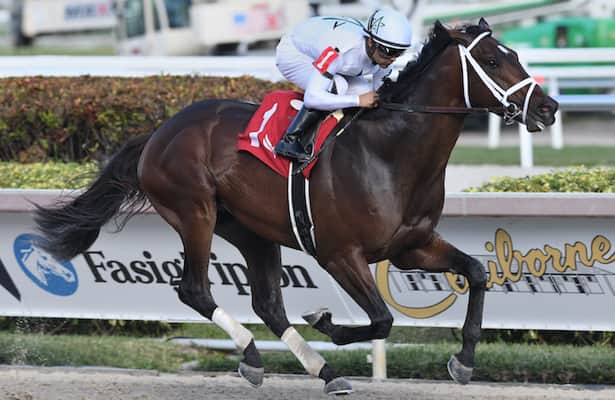 WinStar Farm LLC and Siena Farm LLC’s Emmanuel concedes experience to his rivals at Gulfstream Park Saturday, when he is scheduled to make his stakes debut in the $400,000 Fountain of Youth (G2) in only his third career start.

Emmanuel has been quite impressive in romping to victory in his first two starts, but the nagging question facing bettors will be: Does the 3-year-old son of More Than Ready have the stuff to prevail over his more seasoned competition in the 1 1/16-mile prep for the $1 million Florida Derby (G1) on April 2?

The 76th running of the Fountain of Youth will be featured in a mega promotion between Gulfstream Park and Santa Anita, which will host 15 stakes (14 graded stakes) between them on Saturday. The Coast to Coast All Dirt Stakes Pick 5 and Coast to Coast All Turf Stakes Pick 5, multi-race wagers with a $1 minimum and a 12 percent takeout, will be on the cross-track wagering menu. There will also be a free contest with a chance to win a $5 million jackpot for picking the winners of all 15 stakes that will be run at that day at the 1/ST sister tracks.

Emmanuel’s lack of race experience will hardly discourage handicappers familiar with Pletcher’s past performances with lightly raced horses at Gulfstream. The Hall of Famer saddled Itsaknockout for a 2015 Fountain of Youth victory in his third career start after a pair of victories at Gulfstream.

“They’re both talented horses. Emmanuel has a bit of a larger physical presence than a lot of the More Than Readys we’ve had. He’s a good-sized, strong colt with a really good More Than Ready disposition,” Pletcher said. “He’s a very straightforward, very professional, smart colt.”

Emmanuel, 9-2 in the morning line, made an auspicious debut Dec. 11 at Gulfstream, scoring a front-running 6 3/4-length triumph in a mile maiden special weight event. In his two-turn debut in a 1 1/16-mile allowance at Tampa Bay Downs Jan. 30, he scored a gate-to-wire victory by 4 1/2 lengths. While Emmanuel has been successful at both Gulfstream and Tampa, Pletcher opted for the Hallandale Beach track for his colt’s stakes debut.

“He broke his maiden here. We know he likes the track,” said Pletcher, who also won the Fountain of Youth with Eskendereya in 2010 and Scat Daddy in 2007. “We like the timing of the Fountain of Youth. It puts him in a good position, if he runs well enough, to take a look at the Florida Derby.”

Mo Donegal, 3-1 in the morning line, brings a stronger body of work into the Fountain of Youth than his Pletcher stablemate. The son of Uncle Mo is coming off a late-surging third-place finish in the Feb. 5 Holy Bull (G3) in his 3-year-old debut, after finishing off his 2021 campaign with a victory in the 1 1/8-mile Remsen (G2) at Aqueduct Dec. 4.

“It was just a matter of deciding if a race between now and the Wood Memorial is going to move him forward,” Pletcher said. “The goal is to have him peak on Kentucky Derby Day.”

Mo Donegal has raced off the early pace in all four of his races.

“There could be a fast pace, which wouldn’t hurt his running style,” Pletcher said.

Lucky Seven Stable’s Rattle N Roll brings Grade 1 credentials into the Fountain of Youth, in which he is scheduled to make his 2022 debut after closing out his juvenile campaign with an off-the-pace 4 1/2-length victory in the Oct. 9 Breeders’ Futurity (G1) at Keeneland.

“He’s a beautiful horse to be around. He’s a bit of a set-up horse,” trainer Kenny McPeek said. “He needs pace in front of him. That’s out of our control, but we’re looking to get two races into him before Kentucky and go from there.”

Brian Hernandez Jr. will travel from New Orleans to accept the return mount aboard the son of Connect.

Tami Bobo’s Simplification enters the Fountain of Youth off a gritty second-place finish behind White Abarrio in the 1 1/16-mile Holy Bull, in which he had a troubled start and experienced a wide trip.

“The bad news in his last race, he didn’t win. The good news, we know he can run from behind and run in the front,” trainer Antonio Sano said.

Simplification had previously scored a front-running victory in the Mucho Macho Man over a one-turn mile.

“Each day, he is a more serious horse. Maybe before he was a little green, but right now, he has more concentration,” Sano said. “He’s a different horse of all the horses I have.”

Jose Ortiz is scheduled to ride Simplification for the first time Saturday.

Gentry Farms’ A.P.’s Secret is scheduled to make his stakes debut in the Fountain of Youth after winning two of three starts.

“We’re exited to run him. He’s a good horse. We believe he is a high-quality colt,” trainer Saffie Joseph Jr. said. “This race is coming up competitive, so this is his chance to show if he belongs or not.”

The son of Cupid, who more recently scored a front-running victory in a one-turn mile optional claiming allowance while wearing blinkers for the first time, will make his debut Saturday.

Two turns, “we feel that’s what he wants to do, but he still has to prove it,” Joseph said. “I think he’s a horse that can sit off the pace and not have to be rushed.”

Tyler Gaffalione has the call on A.P.’s Secret.

“He came out of the one-hole and Joe (Talamo) asked him a little bit and he got aggressive,” Romans said. “We won’t expect to see him on the pace this time. There’s a lot of speed in there. We’ll just sit off it and come running.”

Howling Time had previously broken his maiden and won the Street Sense Stakes at Churchill.

Romans is also scheduled to saddle West Point Thoroughbreds and Albaugh Family Stable’s Giant Game, a son of Giant’s Causeway who finished third in the Breeders’ Cup Juvenile before finishing sixth in the Holy Bull.

Joe Talamo has the return mount aboard Howling Time, while Corey Lanerie is scheduled to ride Giant Game for the first time.

Hall of Fame trainer Bill Mott is also represented by two colts in the entries for the Fountain of Youth – LRE Racing LLC and JEH Racing Stable LLC’s High Oak and OXO Equine LLC’s Galt. Galt is on the also-eligible list of one and will need a defection in the main body of the 12-horse field to draw into the race.

High Oak is scheduled to make his first start since finishing fourth in the Sept. 6 Hopeful (G1) at Saratoga. The son of Gormley has won his two previous starts, including the Saratoga Special (G2). Galt, an impressive maiden winner in his third career start Dec. 26 at Gulfstream, set the pace before fading to fourth in the Holy Bull.

Junior Alvarado has the return mount aboard High Oak, while Joel Rosario has the call on Galt.

Santa Rosa Racing Stable’s Markhamian, who captured the seven-furlong Pasco at Tampa Bay Downs; Edge Racing’s In Due Time, an impressive optional claiming allowance winner Feb. 4; Stonehedge LLC’s Dean Delivers, a close-up second in the seven-furlong Swale on the Holy Bull undercard; and OGMA Investments and Jack Hardin Jr.’s O Captain, who finished third in the six-furlong Limehouse after breaking his maiden impressively; are also entered in the Fountain of Youth.

Flatter: Hank ‘The Hammer’ Goldberg was all about friends
It was about 2 1/2 years ago when I last saw Hank...

Barn Tour: Motion on what's next for Spendarella, other talent
As he rattled off status updates on some of the pr...
x