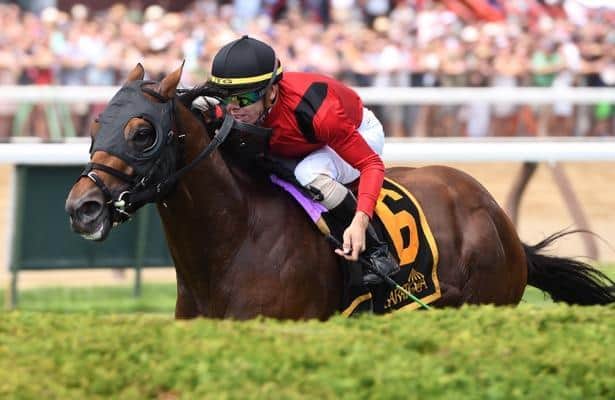 In a Troy Stakes contested without 3-5 morning-line favorite World of Trouble, Leinster emerged Saturday as a name to watch in the turf sprint division, blazing a track record at Saratoga.

The Rusty Arnold-trained Leinster went 5 ½ furlongs over the Spa’s Mellon turf course in 1:00.23 to score by ¾ of a length over Disco Partner.

The 4-year-old Majestic Warrior colt stalked as Rocket Heat set live fractions of :20.82 and :43.01, then drove home four-wide down the stretch.

Leinster sped by Rocket Heat, Pure Sensation and, finally, Disco Partner to the wire under jockey Tyler Gaffalione for his first stakes score.

Campaigned by Amy E. Dunne, the Kentucky-bred Leinster started his career 0-for-13 but is now riding a three-race winning streak, with all three wins coming in turf sprints.

“This horse just got good when we started sprinting him on the grass,” Arnold said. “He's 3-for-3. I guess it took it a long time for us to figure out what he wanted to do, but he figured it out.

“It's obviously a fast course and he seemed to like it.”

Arnold plans for Leinster to make his next start during the upcoming, all-turf Kentucky Downs meet.

The Kentucky Downs Turf Sprint (G3), a Breeders’ Cup Turf Sprint “Win and You’re In” challenge race, goes six furlongs Sept. 7 and would be a logical next step.

World of Trouble, who is 4-for-4 this season with two Grade 1 victories and another Grade 2 score, was scratched Saturday morning, sapping some star power from the Troy field.