Emerging King for a Day a product of connections' patience 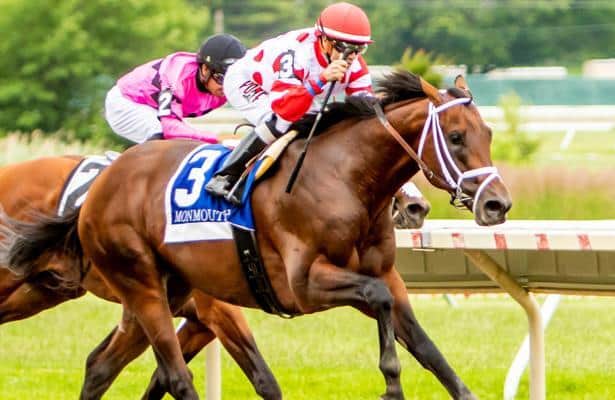 Rick Sacco, racing manager for John Brunetti’s Red Oak Stable, says there’s a “72-hour rule” within the operation during which connections will celebrate King for a Day’s upset victory Sunday over Maximum Security before discussing what may come next.

“Then we’ll start jogging him on the track and talking about all these wonderful things to come,” said Sacco, whose colt opened up some prestigious summer options with his victory in Monmouth Park’s Pegasus Stakes.

Todd Pletcher-trained King for a Day might earn a trip back for the July 20 Haskell Invitational (G1), or there’s also the July 27 Jim Dandy (G2) at Saratoga leading into the Travers Stakes (G1).

Connections could head into any of them with a now horse who has won three of his five starts, earning a lofty 102 Beyer Speed Figure when edging past Maximum Security in Sunday’s 1 1/16-mile feature.

That Maximum Security registered a 100 has Sacco particularly excited about what’s ahead. Even though the race was a Haskell prep for the disqualified Kentucky Derby winner, “That’s as fast as that horse usually runs,” Sacco said.

“…I was at Monmouth Park the whole week looking at Maximum Security — two minute lick, breeze, walk on and off the track — and to me, the horse looked fantastic. He’s carrying weight. He’s bright-eyed. The horse looked super to me the entire week.”

King for a Day added his name to a top class of Red Oak 3-year-olds that also includes Grade 1-winning sprinter Mind Control. Both hail from the same family, with King for a Day’s dam, Ubetwereven, also Mind Control’s grand dam.

Going back to his 2-year-old season, Uncle Mo-sired King for a Day offered excuses in both his defeats, Sacco said.

First out, a rival clipped heels ahead of King for a Day, forcing him to take up in a six-furlong Saratoga sprint won by eventual Grade 1 hero Complexity. Second out, given a clean trip, he left, among others, Tacitus in his wake. At third asking, King for a Day took the lead at the top of the stretch in Churchill Downs’ Kentucky Jockey Club Stakes (G2) before fading to finish fourth by two lengths.

“I felt that when he went to the lead, he was going to kick on and win,” Sacco said. “Then we knew after the race we had a little issue.”

They were usual 2-year-old setbacks — growing pains including shin problems — that led to a six-month layoff.

“Then he fell off everybody’s radar,” Sacco said.

WATCH: A look back at King for a Day's debut

King for a Day returned to the work tab in February, eventually returning on the Preakness Stakes undercard in the Sir Barton Stakes. He stalked the pace, took over when asked and cruised to a 2 1/2-length score.

“It was exactly what we were looking for to come off the bench and get our horse back in gear confidence-wise, mentally and physically,” Sacco said. “We get to run in this race that, on paper, is basically an a-other-than. He did what he needed to do, but it was quite easy.”

From there, connections were looking to the July 13 Indiana Derby (G3) as one last opportunity to show progress before taking on top competition in the 3-year-old crop. But after King for a Day’s second work back, Sacco received a call from the trainer.

“Rick, I can’t keep this horse on the ground,” Pletcher told him.

The Pegasus became the new plan.

“We waited patiently with this horse. Our program kicked in,” Sacco said. “He came back with a couple of breezes, and we were right where we wanted to be with him.”

What resulted was a one-length victory over the colt many considered the division leader. There will soon be a new next race target, “but right now,” Sacco added, “we’re just enjoying the win.”