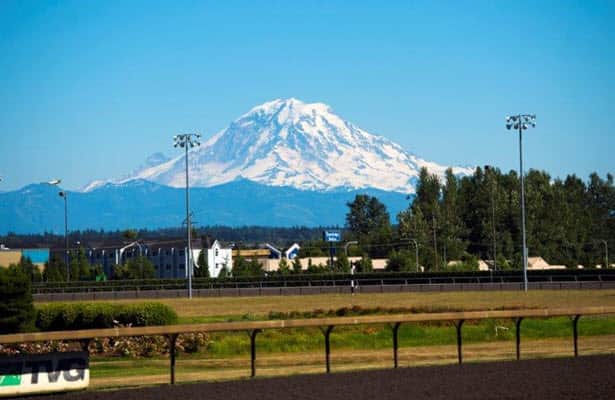 Emerald Downs will offer what officials say is the lowest takeout in North America for win, place and show bets when it kicks off its 2022 racing season on Sunday.

Beginning with a nine-race program on opening day, takeout on those wagers will be 14.7 percent, which is down from 16.2 percent in 2021.

"We wanted to reward the bettors and try and stand out a little bit," Emerald Downs’ director of publicity Joe Withee told Horse Racing Nation.

“That should help with field size, of course,” Withee said.

Opening day attracted 73 horses for an average of 8.1 starters per race.

This season will also feature a new race-caller. Bill Downes, who spent the past nine years announcing at Indiana Grand (now Horseshoe Indianapolis), will take over in the booth.

Purses for claiming and allowance races will be at an all-time high. The Auburn, Wash. track, which does not have alternative gaming, is owned and operated by Muckleshoot Tribe.

Withee said the boost is due to overall business being “a little more profitable” last year. Add the return of on-track promotions after a COVID hiatus, some of which draw significant crowds to Emerald Downs, and the owners felt it “could add some more money and make it work business-wise."

Among those promotions is the Fireworks Spectacular on July 3 and a “T-Rex race,” an event that officials noted when last held in 2019 became a social media hit with more than 100 million views.

As for what horseplayers can expect on the track, jockey Alex Cruz returns after being the leading rider both of his two seasons at Emerald Downs. Additionally, Kevin Orozco will take up full-time residence this meet. Last year, while based at Golden Gate, he he went 5-for-11 in Emerald Downs' stakes to lead all jockeys.

“We’ve got our best jockey colony in a whole bunch of years,” Withee said of the track that opened in 1996.

The backstretch is led by trainer Frank Lucarelli, a seven-time leading trainer at Emerald Downs and also its all-time leader in wins and purse earnings. Withee noted Lucarelli could have an even bigger presence this season after branching out with his stable the last couple of years.

Trainer Blaine Wright, who largely plies his trade at Golden Gate Fields, has been the one to fear in stakes races under Mt. Olympia.

There will be 21 stakes at Emerald Down this season led by the traditional Longacres Mile on Aug. 14, which received a $50,000 purse boost to $150,000. There will also be three supporting stakes for open company on the program, all worth $75,000: the Muckleshoot Derby, Washington Oaks and Emerald Distaff.