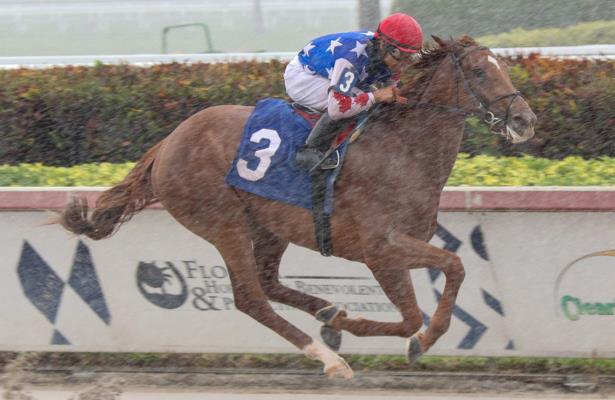 Attachment Rate has flashed ability and run pretty fast times against good competition but has had an easier time finding trouble than the winner's circle.

“Attachment Rate has had a lot of ‘trouble lines,’” said trainer Dale Romans, referring to comments in a horse’s past form. “We’re just waiting for the right set-up for him to pounce. I think he’s going to run well this weekend. He’s a talented horse. He just needs to move up just a touch.

“Art Collector stands over the field on form. But I feel there are a bunch in there just like us: Waiting for that breakthrough race.”

Romans long has been an unabashed cheerleader for Ellis Park, particularly the track’s 2-year-old program. He’s among those hoping to see the $200,000 Ellis Park Derby become a major fixture after the Triple Crown, perhaps a prep race for Saratoga’s prestigious Grade 1 Travers Stakes, which this year was moved up to Saturday to allow it to be a steppingstone to the delayed Kentucky Derby on Sept. 5.

Noting that racing’s national focus Sunday will be on the Ellis Park Derby, Romans said, “There will be a lot of eyes on Ellis Park. You’ve got to make the best of a bad situation (with COVID-19). The good thing is that Ellis is going to get some good exposure on Sunday. It’s the first time they’ve had a potential Derby favorite ever start there, and the first time ever having a Derby prep. Hopefully it puts the race on the map.”

West Point Thoroughbreds is waiting for Winning Impression to run back to his name, and a good time would be Sunday’s Ellis Park Derby.

The Dallas Stewart-trained gelding showed great promise over the winter when he won a maiden race in the slop, followed by a second and good third in allowance races in New Orleans. Shipping to Arkansas' Oaklawn Park, Winning Impression finished first in another allowance race only to be disqualified to fifth for what was ruled interference.

A distant fourth in the Arkansas Derby (G1) – then subsequently elevated to third – against the talented Charlatan was understandable. A seventh-place finish in the Indiana Derby (G3) in his next start? Not so much.

Or, as West Point executive vice president Jeff Lifson says, “We have no idea why that was the stinkerooni of all stinkeroonis. He did not show up, and he came back to Churchill Downs the next day and looked at us like, ‘What do you want from me? I’m fine.’ We were dumbfounded. He’s run too many fast races on the (handicapping) sheets. Dallas’ first reaction was, ‘Draw a line through it, and we’ll just point for Ellis.’

“He’s trained beautifully. The only theory I have on the whole thing is that was the very first race that he shipped in the day of and ran. Now that is a very small, skinny straw to grasp at. But in this game, if they don’t tell you, then you have to play forensic scientist.”

“We hope that somebody will be capable of going out with Art Collector and that the pace will be fast and furious,” Lifson said. “I don’t know if that’s the case or not. They’re wonderful horses, but at Oaklawn we ran against some pretty serious horses, too.”

Multiple stakes-winning 3-year-old filly Hello Beautiful, stabled at Laurel Park with trainer Brittany Russell, will be making the first start outside of her native Maryland when she tackles 10 rivals in Sunday’s $100,000 Audubon Oaks at Ellis Park.

“Gamine looks like she’s a super-special filly, so we were just kind of trying to duck our heads this time,” Russell said. “I just want to give our filly a chance to keep winning and keep building her confidence.

“If it comes time to have to take on something like her next time, OK, cool. We’re OK with that. It just felt like the right thing to do to keep our filly on the right path,” she added. “Sometimes you see horses take on these monsters and it kills their confidence and knocks them out for a long time.”

Winner of the Maryland Million Lassie and Maryland Juvenile Filly Championship to close her 2-year-old season, Hello Beautiful has raced twice this year. She rebounded from her seventh-place finish in a turf sprint June 1 – her only time running out of the money in eight starts – with an allowance romp over the main track 19 days later.

Russell is married to injured jockey Sheldon Russell, who has been the only jockey to ride Hello Beautiful in her races but is sidelined with a broken wrist. In his place will be two-time Eclipse Award winner Julien Leparoux.

“She’s in good hands,” Brittany Russell said. “The main thing is she’s doing well. We’re hoping we’re going to a spot where she can jump up and win and keep her going in that direction.”