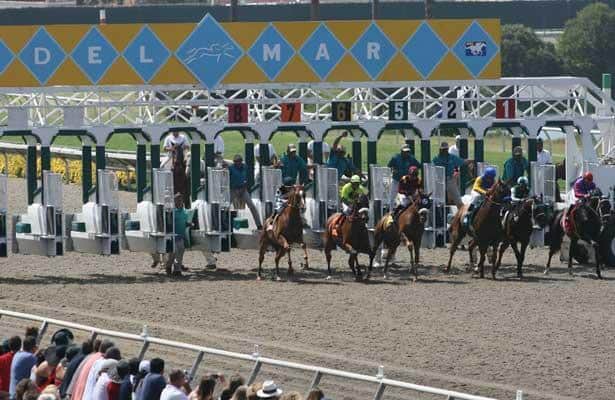 Eleven promising three-year-olds will clash at a flat mile on the main track Friday in the $100,000 Shared Belief Stakes at Del Mar. The race, formerly called the El Cajon Stakes, honors the 2014 Pacific Classic winner whose brilliant career was ended when he died unexpectedly of complications of colic in December of 2015.

Although only a winner of a maiden race in his last start, Accelerate figures to be well-supported on the basis of that victory which he scored by 8 ¾ lengths in a fast 1:34 3/5 for the Shared Belief distance. John Sadler trains the son of Lookin At Lucky, a $380,000 Keeneland yearling purchase.

Trainer Jerry Hollendorfer will send out two contenders in Taman Guard, fourth in the recent Real Good Deal Stakes at seven furlongs, and Who’s Out, a good second in an optional claiming race July 30.

Taking on colts in the Shared Belief will be English-bred Belvoir Bay, winner of the Blue Norther Stakes over the Santa Anita grass last December.

Post time for the first of eight races Friday will be 3:30 p.m.