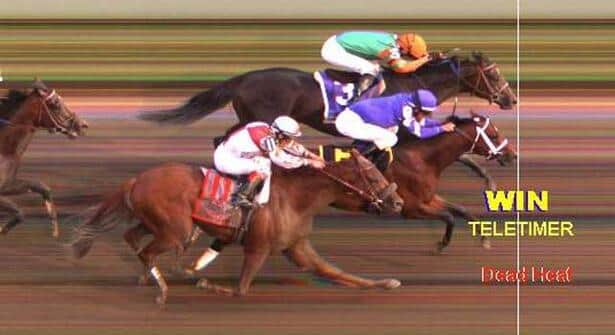 In an electrifying finish, favored Alpha came back to hit the wire alongside 33-1 shot Golden Ticket Saturday afternoon at Saratoga Race Course, resulting in the first dead heat in the Grade 1, $1 million Travers since 1874.

The 2-1 favorite off his victory in the Grade 2 Jim Dandy earlier in the meet, Alpha ran third on the outside behind pacesetter Speightscity and Stealcase through opening fractions of 23.51, 48.06, and 1:12.62 while Golden Ticket, who had only a maiden victory in nine previous starts, was tucked in fourth along the rail.

With Speightscity clinging to the lead as the field of 11 3-year-olds rounded the far turn, jockey Ramon Dominguez made a three-wide move with Alpha and gunned for the lead approaching the quarter pole. At the same time, jockey David Cohen sent Golden Ticket rocketing through an opening along the rail left by the flagging Speightscity and swiftly assumed command straightening for home.

Seemingly beaten as Golden Ticket began edging away inside the eighth pole, Alpha dug in through the final yards and, with his last lunge, hit the finish line in tandem with Golden Ticket.

At the wire, neither jockey realized they had both won their first Travers.

“I don’t think either [one of us] really knew,” said Dominguez. “When we realized it was a dead heat, we were pretty relieved and pretty happy at the same time.”

Alpha and Golden Ticket completed the 1 ¼ miles in 2:02.74 in the first dead heat in the “Mid-Summer Derby” since 1874, when Attila and Acrobat finished in a tie, with Attila winning a run-off to be awarded the official victory.

“At the sixteenth pole, I thought we were second-best,” said Alpha’s trainer, Kiaran McLaughlin. “I didn’t think we were going to get there. Then, at the last lunge or two, I thought we got there. The photo indicated a tie, and I said, ‘We’ll take it.’”

Added Kenny McPeek, trainer of Golden Ticket: “I thought we were beat at first, then I thought we won. I couldn’t tell. I’m thrilled we finished in a dead heat. It couldn’t work out better for the two of us.”

The victory was the first stakes win for Golden Ticket, a son of Speightstown who carries the colors of Magic City Thoroughbred Partners. Unraced since finishing second in an optional claimer at Churchill Downs on May 5, Golden Ticket’s previous best effort in a stakes was a second in the Grade 2 Tampa Bay Derby in March.

Alpha, a Bernardini colt who broke his maiden last year at the Spa, opened his 3-year-old campaign by winning the Count Fleet and Grade 3 Withers at Aqueduct Racetrack. He next was second to Gemologist in the Grade 1 Resorts World Casino New York City Wood Memorial at the Big A and 12th in the Kentucky Derby. Declared from the Belmont Stakes after developing a fever, he returned to action with a front-running, two-length triumph in the Jim Dandy on July 27.

With today’s dead heat, he becomes the 10th horse to complete the Jim Dandy-Travers double.

“It’s a dead-heat, but it goes in the ‘W’ column,” said McLaughlin. “It doesn’t happen very often in a Grade 1, $1 million race, but we’re all happy it happened today for two guys from Lexington, Ky. We’re happy to win a Grade 1 with this horse.”

Fast Falcon, saddled by Hall of Famer Nick Zito, rallied strongly to finish third, a length ahead of the McPeek-trained Atigun.

Completing the order of finish were Nonios, Neck ‘n Neck, Stealcase, Speightscity, Liaison, Five Sixteen, and Street Life, who was vanned off after the finish. According to trainer Chad Brown, Street Life sustained a soft tissue injury to his left front pastern. X-rays were negative and the injury was not life-threatening, said Brown, adding the colt will be further evaluated on Sunday.