Ekati’s Phaeton Gets the Edge in Old Hat 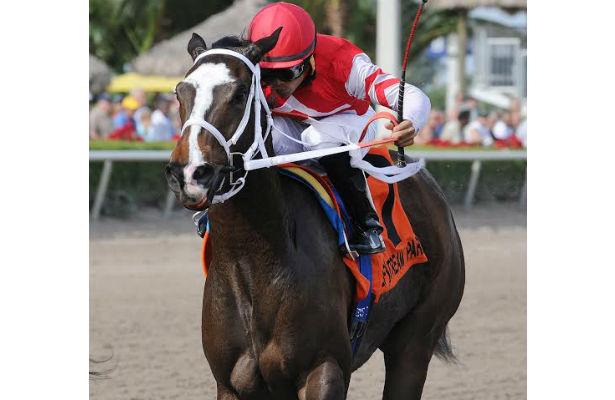 Unsuccessful in two previous stakes starts, a return to her favorite track and a step up in class proved to be a winning combination for Ekati’s Phaeton.

The talented Tale of Ekati filly opened her 3-year-old season by turning back an early challenge from favored Fashion Alert and out-finishing R Sassy Lass down the stretch to win the $100,000 Old Hat (G3) on Saturday at Gulfstream Park.

Her half-length victory improved Ekati’s Phaeton ($17.20) to 3-0 lifetime at Gulfstream all going six furlongs on dirt. R Sassy Lass was a clear second, 6 ¼ lengths ahead of 2-5 favorite Fashion Alert.

Owned by Phaedrus Flights and ridden by Luis Saez, Ekati’s Phaeton broke sharply from post 7 and moved up alongside early front-runner Concealedwithakiss, who led through a brisk quarter-mile in 22.72 seconds. Grade 3 winner Fashion Alert had a jumbled start at the rail but quickly moved herself into contention between the two leaders after a half in 45.09.

“I left it up to Luis,” Kaplan said. “I told him there was speed in the race and he said he was going to go with what the break is. I said to just do whatever you want to do. She broke good and then the favorite got stuck in between. He let the favorite come inside of him and I was a little upset at the time, but I think we maybe intimidated that horse out of there, so maybe it was a good factor.”

“We had a perfect trip,” Saez said. “My filly broke good. It looked like she could have taken the lead, but I didn’t want to do that. I saw a replay of her last race and she looked like she waited for horses. Today, I wanted to come from behind. When we came to the stretch, I had to let her run. When she saw the other horse passing her, she started running again.”

Ekati’s Phaeton opened her juvenile season with back-to-back victories at Gulfstream, breaking her maiden by nose last August before routing winners by 10 ¼ lengths in September. She was off the board in the Our Dear Peggy over the turf in October, closing her year by finishing second in the House Party at Gulfstream Park West.

“She’s a game mare, and she’s got a tremendous amount of talent,” Kaplan said. “You haven’t seen her speed yet.”