Eight Rings has questions to answer in Oaklawn's Bachelor 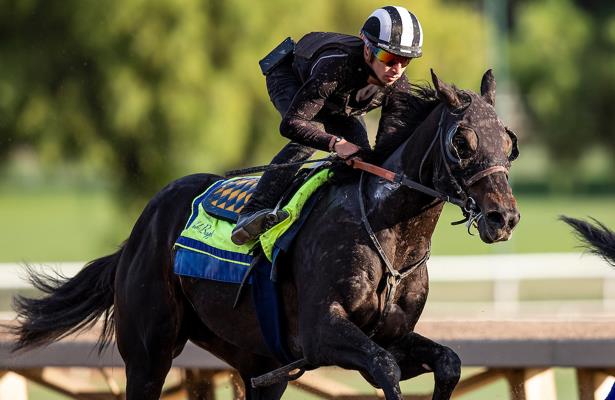 The question regarding Eight Rings is the same now as it was after he faded to sixth in last November’s Breeders’ Cup Juvenile, ending an up-and-down 2-year-old season highlighted by a Grade 1 victory.

Which version of the colt will show up on race day?

The Bachelor, restricted to 3-year-olds, measures six furlongs, the shortest distance the son of Empire Maker will be asked to go in the afternoon since he ran off to win his debut last August at Del Mar, stamping himself as a young horse to watch from the Baffert barn.

Away next time as the Del Mar Futurity (G1) favorite, Eight Rings dumped jockey Drayden Van Dyke shortly after the start, but the colt rebounded when stretching out around two turns to take the American Pharoah Stakes (G1) at Santa Anita Park.

Eight Rings concluded 2019 with the Breeders’ Cup Juvenile, in which he looked well positioned behind pace-setting winner Storm the Court but didn’t go on in the stretch.

Baffert has had Eight Rings in and out of training since then, more recently lauding the way he’s worked up to this season debut. In a breeze last Friday, he went a bullet five furlongs in 59 seconds over the dirt at Oaklawn, signaling readiness for this task.

Joel Rosario will ride Eight Rings, who drew post No. 7.

Three other stakes winners are in for the Bachelor: Big Returns, Long Weekend and Sir Rick.

Big Returns, a son of Mr Big trained by Doug O’Neill, turned in a 61-1 allowance upset at Oaklawn last time, which O’Neill credits to getting the colt back sprinting on the dirt.

Sir Rick, by Paynter, is a Robertino Diodoro trainee who two back won Sunland Park’s Mine That Bird Derby before stopping early in the April 11 Oakawn Stakes run over a sloppy track.

Others from the allowance ranks fill out the rest of the field, namely Echo Town, who will aim to give trainer Steve Asmussen his third straight Bachelor win following Mitole (2018) and Nitrous (2019). For L and N Racing, Echo Town is 2-for-3 and a speedy last out winner covering these same six furlongs.

Ginobili is another notable. While fifth April 5 in his only local start, the Richard Baltas-trained son of Munnings also pushed unbeaten Nadal most of the way when they met back on Feb. 9 in Santa Anita Park’s San Vicente Stakes (G2).

Carded as Race 9, the Bachelor goes at 5:45 p.m. ET on a card that also includes the $125,000 Carousel for older female sprinters. Another California shipper, Bellafina, will match up with Mia Mischief in that event, Race 10.