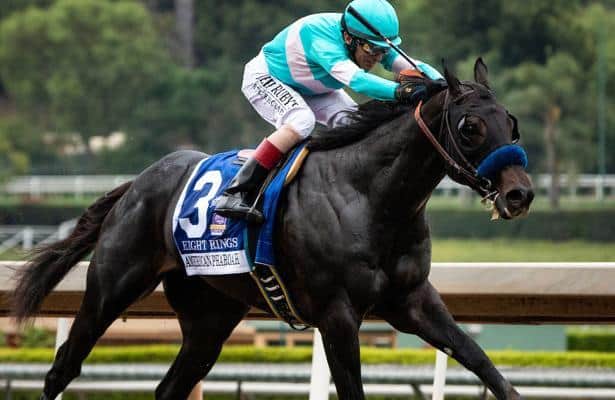 In a wire-to-wire performance, Eight Rings redeemed himself Friday while coasting to a victory in Santa Anita Park’s Grade 1, $300,000 American Pharoah Stakes that makes him one to watch on a pair of high-profile fronts.

The son of Empire Maker earned a “Win and You’re In” spot to the Breeders’ Cup Juvenile back at Santa Anita on Nov. 1.

Eight Rings also entered an early tie atop the 2020 Kentucky Derby leaderboard, and the Triple Crown trail’s sure to be a discussion given this colt’s connections.

Jockey John Velazquez was aboard for trainer Bob Baffert one start after Eight Rings threw jockey Drayden Van Dyke as the odds-on favorite in the Del Mar Futurity (G1). That race followed a smashing maiden special weight debut that signaled his talent.

Friday, Eight Rings didn't let the competition close over what was playing as a tiring Santa Anita surface.

“We saw the Eight Rings that we were hoping to see at Del Mar,” Baffert said.

The duo finished up in 1:45.41 for 1 1/16 miles, well ahead of American Theorem. It was another ways back to Storm the Court with Express Train fourth in the field of nine.

Eight Rings did not disappoint in the G1 American Pharoah Stakes!

Another victory on the card for Hall of Famers Jockey @ljlmvel & Trainer Bob Baffert!

We'll see you in the @TVG @BreedersCup Juvenile this November! #WinAndYoureIn pic.twitter.com/GwDYohqdQW

Eight Rings, off at 6-5, returned $4.40 to win. He’s Baffert’s ninth winner of the race formerly known as the FrontRunner Stakes, joining a group that includes its current namesake, 2014 victor American Pharoah.

A partnership of SF Racing, Starlight Racing and Madaket Stables, among others, campaign the $520,000 yearling purchase.

Eight Rings competed a successful Friday afternoon for Baffert and Velazquez, who also teamed up for Bast’s victory in the Chandelier (G1) for 2-year-old fillies.

“It’s very important that he got a good, positive race out of it,” Baffert said. “That’s what you want. We’ve just got to keep him happy and healthy.”

Two more “Win and You’re In” races in the division remain, both Oct. 5, in the Champagne Stakes (G1) at Belmont Park and the Breeders’ Futurity (G1) at Keeneland.

Eight Rings and the Dale Romans-trained Dennis’ Moment are also the early leaders in the 2020 Road to the Kentucky Derby standings with 10 points apiece.

2020 Road to the Kentucky Derby standings