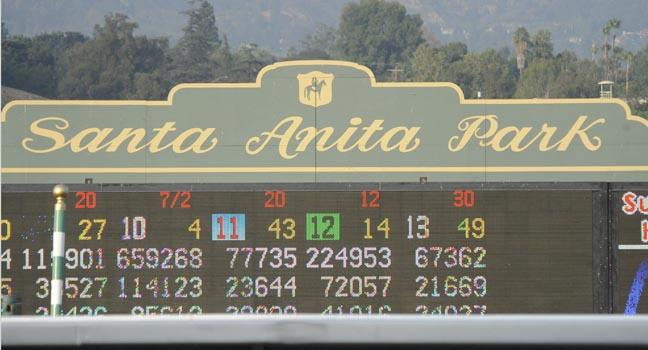 A winner of two of her last three starts, including her most recent, the Grade II Yellow Ribbon Handicap on Sept. 2, Florida-bred Egg Drop figures prominently among  a field of nine fillies and mares in Sunday’s Grade II, $150,000 Goldikova Stakes at one mile on turf.

A 4-year-old daughter of Alphabet Soup, Egg Drop pressed the pace in the 1 1/16 miles turf Yellow Ribbon at Del Mar and took a hard-fought head decision over longshot Appealing, who she’ll again face on Sunday.

Owned by Little Red Feather Racing, Egg Drop will try the Santa Anita turf for the first time in the Goldikova.  In her only other attempt at a mile on grass, she was second, beaten a half length, by the highly regarded Schiaparelli in the Grade II Royal Heroine Mile July 6 at Betfair Hollywood Park.

Trained by John Sadler, and owned by Michael Talla, More Chocolate is 7-2-1-1 on grass and hasn’t run on turf since placing third in the Grade III Robert J. Frankel Stakes at Santa Anita Dec. 30.  A 4-year-old daughter of Malibu Moon, More Chocolate is 13-3-4-1 overall with earnings of $367,642.  Rosario has ridden her twice and was a handy 3 ¼ length turf allowance winner Nov. 1, 2012.

Customer Base, second, beaten a half length as the 2-1 favorite in the one mile turf Swingtime Stakes Oct. 5, and a close fifth in the Yellow Ribbon, rates a big chance for trainer Tom Proctor and Glen Hill Farm.  A 4-year-old Lemon Drop Kid filly, Customer Base has three seconds from five tries at one mile on grass.  She is 16-4-3-1 overall with earnings of $244,182.

Victorious at 7-2 in the Swingtime, Miss Pippa will bid for her second consecutive win and be ridden back by Mike Smith on Sunday.  Trained by John Sadler, Miss Pippa has two wins and three seconds from six starts at one mile on turf and is 11-3-4-1 overall.

Owned by Joy Ride Racing, Miss Pippa, a 4-year-old filly by Master Command, was taken well off the pace in the Swingtime by Smith and would benefit from a fast pace on Sunday.  She has earnings of  $173,602.

Off at 34-1 in the Sept. 2 Yellow Ribbon, Irish-bred Appealing figures to be a much shorter price in the Goldikova.  Ridden by Brice Blanc at Del Mar, she’ll get the services of Rafael Bejarano on Sunday.  With an overall mark of 14-4-2-2, three of her wins have come on turf.  Trained by Paddy Gallagher and owned by Yvonne Jacques, she has earnings of $134,383.