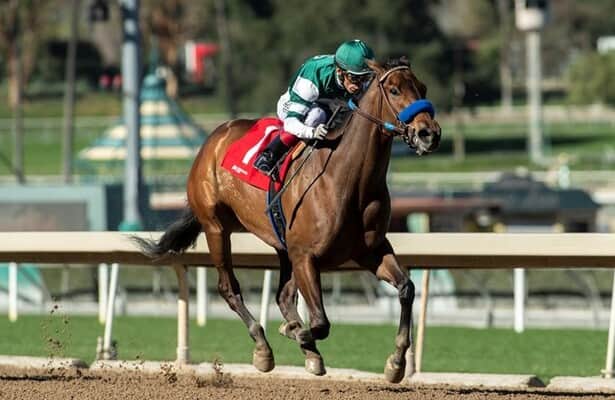 In what shapes up as a clash between a pair of highly regarded distaffers Sunday at Santa Anita, John Sadler’s Edgeway rates a slight advantage over Bob Baffert’s Private Mission as they head a field of five older fillies and mares in the Grade 3, $100,000 Las Flores Stakes, to be contested at six furlongs.

With a field of five older fillies and mares entered, Edgeway should be very hard to beat. She was second two starts back in the Breeders’ Cup Filly & Mare Sprint Nov. 6 at Del Mar and most recently victorious over Baffert’s talented Merneith in the ungraded Kalookan Queen at 6 1/2 furlongs here on Jan. 2, and she has John Velazquez back in the saddle.

A 5-year-old mare by Competitive Edge out of the Stormin Fever mare Magical Solution, Edgeway is owned by Hronis Racing and will be seeking her second graded-stakes victory. A one length winner of the Rancho Bernardo Handicap (G3) going 6 1/2 furlongs three starts back on Aug. 20, she has an outstanding overall mark of 10: 6-2-1 and earnings of $596,360.

Victorious by 1 3/4 lengths in gate-to-wire fashion at 2-5 in the Kalookan Queen, her win looks even better when Merneith’s next-out win in the Santa Monica Stakes (G2) is factored in. Expertly managed by her connections, Edgeway won three of her five starts last year while banking $431,000.

Owned by Baoma Corp., Private Mission was a $750,000 yearling purchase who will be making her eighth start on Sunday. Although she won back to back graded stakes, the Torrey Pines (G3) at one mile on Aug. 21 and the Zenyatta (G2) at 1 1/16 miles here on Oct. 3, she comes off a pair of subpar races and will thus likely be the second choice at Las Flores post time.

Off at 10-1 in the Grade I Breeders’ Cup Distaff two starts back on Nov. 6, she showed the way early but tired badly to finish a distant last. In her most recent start, the La Brea Stakes (g1) at seven furlongs on Dec. 26, she was off as the 3-5 favorite, but finished an even sixth, beaten 7 1/2 lengths while never threatening.

A 4-year-old filly by Into Mischief out of the Unbridled mare Private Gift, Private Mission had no recorded works in January. Dating back to Feb. 11, she has had five drills, her most recent a three furlong move in 35.60 on Wednesday. With four wins from seven starts, she has earnings of $257,300 as she bids for her third graded stakes victory.