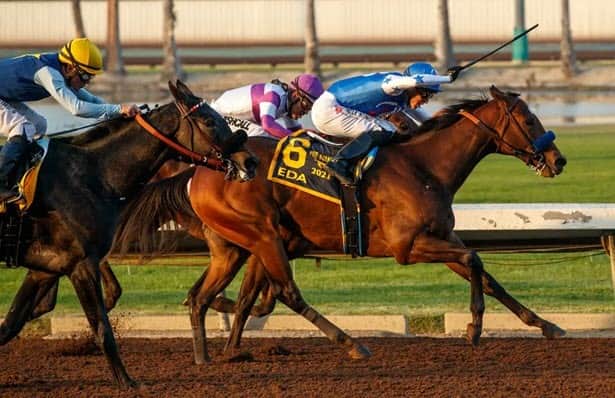 Trainer Bob Baffert made it five consecutive victories in the Grade 1, $300,500 Starlet Stakes as 11-10 choice Eda showed tenacity to turn back a pair of challenges in the stretch Saturday at Los Alamitos.

Trying two turns for the first time in her career after back-to-back sprint stakes wins, the 2-year-old Munnings filly relaxed off longshot stablemate Benedict Canyon early, took over about six furlongs into the race, battled back after being passed inside the final eighth of a mile by 19-1 shot Tonito’s, then held off a large surge by 7-2 third choice Cairo Memories to win by a half-length.

The victory was the third in a row in the Starlet for Baoma Corporation, which also campaigned 2019 heroine Bast and Varda, who scored a 17-1 surprise last year.

“She relaxed and we had a good position on the outside down the backside,’’ said Hernandez. “She responded when I asked her at the head of the stretch and when they came to her on the inside and outside she didn’t want to let them by. She was very game.’’

Another winner by Munnings @coolmorestud

Race 9 at Los Al is up next & it is a Money Back Special Race! pic.twitter.com/J921RoxHOI

Making her first start on dirt after winning twice in three races on grass, Cairo Memories finished a neck in front of Tonito’s and returned $3.40 and $3. The show price on Tonito’s was $4.20.

“She rated well and you never know how they’re going to do going long until you try,’’ said Baffert of the winner. “She relaxed, but turning for home I wasn’t sure. (Hernandez) said she really dug in when she was challenged and didn’t want to lose.

“It was pretty exciting. Eda is getting better and better and getting the Grade 1 for her is very important.

In addition to the five Starlet wins at Los Alamitos, Baffert also captured it three times at Hollywood Park, which offered the race between 1981-2013).  His eight total victories ties him for the top spot with fellow Hall of Famer D. Wayne Lukas.

The disappointment in the race was Grace Adler. The 2-1 second choice, who won the Grade I Del Mar Debutante earlier in the year for Baffert and owners Willow Grace Farm and Michael Lund Peterson, trailed virtually throughout and was eased to the wire by jockey Flavien Prat.

“She got upset in the paddock and (Prat) told (assistant trainer) Jimmy (Barnes) that she just had no interest in running,’’ said Baffert after the Curlin filly’s second poor effort in a row. She finished a distant fifth as the 9-10 favorite in the Grade II Chandelier two months earlier at Santa Anita.