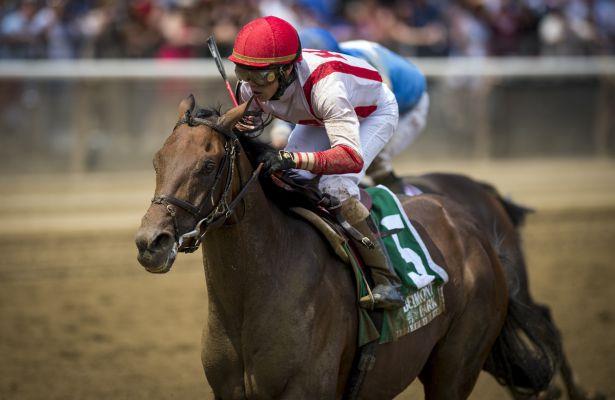 Economic Model will look for his first graded stakes win after a pair of runner-up finishes, headlining a 13-horse field in Saturday's Grade 3, $200,000 Bold Ruler for 3-year-olds and up at seven furlongs on Belmont Park's main track.

Owned by Klaravich Stables and William Lawrence, Economic Model will return to Belmont for the first time since finishing 1 ¼-lengths behind Fish Trappe Road in the Grade 3 Dwyer on July 9. Trainer Chad Brown said the 3-year-old bay colt, who finished second in his Grade 1 debut last out in the King's Bishop on August 27, should be fresh and was training well in breezing four furlongs in 48.58 seconds on Sunday.

"He's been training well and looks good," Brown said. "The distance is good; a mile is probably better, but I think he can be effective at seven furlongs. He likes Belmont very much."

Economic Model has finished off the board just once in seven career starts, going 3-3-0 while earning $424,400. He will depart post 4 in tandem with Joel Rosario.

His stablemate, Threefiveindia, is coming off his best graded stakes effort when he rallied for third in the Grade 3 Gallant Bob on September 24 at Parx Racing. The Amerman Racing 3-year-old is 3-0-1 in five starts, with his only finish out of the money coming in the 2015 Grade 1 Claiborne Breeders' Futurity.

Threefiveindia will be stretched out to seven furlongs looking to build on his two best career Beyer Speed Figures of 98 and 97, respectively, in his last two starts. The chestnut colt drew post 2 with Javier Castellano set to ride.

"He looks good; we'll stretch him out to seven and see how he does," Brown said. "He's a horse who has been improving all summer and fall. He's an exciting horse for now and in the future."

Stallwalkin' Dude will make his first start since finishing a close second to Joking in the Grade 1 Vosburgh on October 1. Trainer David Jacobson's 6-year-old bay gelding tied a personal best with a 103 Beyer Speed Figure last out and will stretch out to seven furlongs for the first time since posting a third-place finish in the Grade 1 Forego on August 27 at Saratoga Race Course.

Owned by Head of Plains Partners and Jacobson, Stallwalkin' Dude will exit post 6 with Irad Ortiz, Jr. in the irons.

"Anywhere between three-quarters and seven-eighths, I'm very comfortable with him," Jacobson said. "One of these days we'll try stretching him out, but right now, he's run very well. One of these days he's going to throw out one of those blowout performances and shock us all. He can do it all. He's been on the lead and he's come from behind. I'll leave it up to the jock."

Green Gratto will look to find his way into the winner's circle for the first time since the Hockessin on July 16 at Delaware Park. Trained and co-owned by Gaston Grant, Green Gratto came in seventh in the Vosburgh and will seek his first graded stakes win since the 2015 Fall Highweight Handicap at Aqueduct Racetrack. Kendrick Carmouche has the call from the inside position.

Ami's Flatter will make his sixth consecutive graded stakes start. After coming in third in the Grade 2 Phoenix last out on October 7 at Kenneland, the Josie Carroll-trained 4-year-old will depart post 8 with Hall of Famer John Velazquez set to ride.

Touchofstarquality, trained by Michelle Nevin, will make his first graded stakes start after three straight runner-up efforts, coming in second in the Seattle Slew, Alydar and State Dinner. Jockey Jose Ortiz will look to save ground in departing from the outside.

Rounding out the field is Cadeyrn, who will make his graded stakes debut for trainer Jeremiah Englehart out of post 10; Liberty Holiday, the Argentinean-bred 4-year-old for trainer Ralph Nicks, will make his first stakes start in leaving post 7; Mylute, also trained by Nicks, has post 5 with Eric Cancel on the call; Gentrify, making his first stakes appearance in 27 career starts, for trainer Raymond Handal out of post 3; Farhaan, trained by Carlos Martin, will line up in post 11; and Face of Winner, saddled by Gustavo Delgado, garnered post 12.