Eclipse finalist Got Stormy penciled in for her 2020 debut 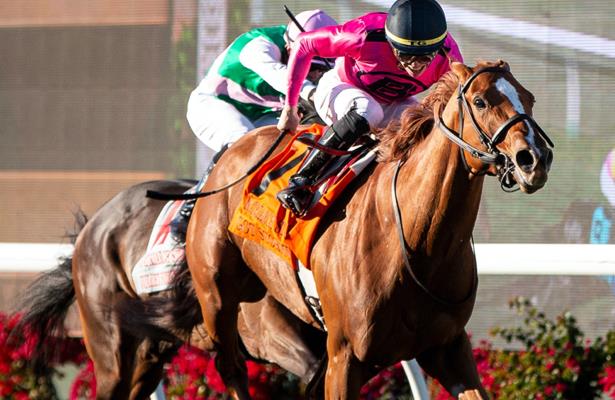 Eclipse Awards votes are in, but trainer Mark Casse isn’t waiting for the results before planning Grade 1 winner Got Stormy’s next start.

The Female Turf Horse division finalist returned to the work tab Tuesday at the Casse Training Center in Ocala, Fla., breezing toward Tampa Bay Downs’ Feb. 8 Endeavour Stakes (G3). A 5-year-old by Get Stormy, the mare won Del Mar’s Matriarch Stakes (G1) on Dec. 1 in her most-recent start following a second to Uni in the Breeders’ Cup Mile at Santa Anita Park. Racing for Gary Barber -- himself an Eclipse Award finalist for owner -- Got Stormy became a multiple graded stakes winner when she captured the Fourstardave Handicap (G1) last August at Saratoga. In that performance, she defeated males and Uni a week after winning the local De La Rose Stakes. “In this day and age, we hear that the horses don’t run enough. Got Stormy ran against colts. She ran all over the place and ran well,” Casse said, looking back at a 2019 campaign when Got Stormy was on the board in all eight of her starts. Other Eclipse finalists in the division are Uni and defending champion Sistercharlie, with the winners to be revealed Jan. 23. “Uni beat her in the Breeders’ Cup, but she beat Uni in the Fourstardave,” Casse said. “It’s always an honor. You’d always like to win, but we’ll see. It is what it is.” The Endeavour, for fillies and mares 4 and up, goes 1 1/16 miles on the turf. Casse-trained Tepin, who won the 2016 Endeavour, used the race to jump start a campaign that ended with a championship. Got Stormy has earned $1,430,578 to date, winning eight times in 18 career starts. She has finished either first or second in her last six starts.