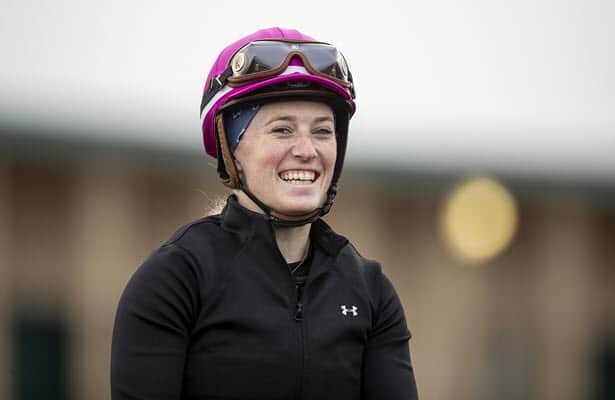 Jessica Pyfer, a rising star of the weighing room in America, has been confirmed to ride in the International Jockeys Challenge.

The event will be held the day before the $20 million Saudi Cup at King Abdulaziz Racetrack on Feb. 25.

Pyfer, who began riding in September 2020, notched an impressive 59 winners from 557 rides in her second full season as a jockey in 2021, amassing prize money of $2.8 million.

Her achievements in such a short time have seen her nominated for an Eclipse Award, which recognizes the achievements of a wide range of horses and participants from across the American Thoroughbred industry.

“I am super excited,” Pyfer said. “It feels like a once-in-a-lifetime opportunity. I’ve only been race riding for about a year and a half and have never competed outside of the U.S., so for an opportunity like this to come along is pretty cool.

“I’ve spoken to Mike Smith, who I know has ridden in Saudi a lot, and he just told me that I’ll have the time of my life, so I couldn’t be more excited.

“My season has been amazing so far and I couldn’t have ever imagined that I’d be where I am now, with both an invite to the International Jockeys Challenge at The Saudi Cup and a nomination for an Eclipse Award.

“It will be amazing to line up against so many great jockeys and a pleasure to ride alongside some of the world’s best female jockeys who I’ve always looked up to.”

Joining the up-and-coming U.S. star is Argentine rider Andrea Marinhas, who began her career in the U.S. and is now based between the U.S. and her native Argentina.

Marinhas currently has 94 career wins to her name, with 15 of those coming this season, 11 in Argentina and four in the U.S.

“I’m so pleased to have been invited,” Marinhas said. “The first thing that came to my mind was I could be riding with many of my favorite jockeys. It will be a beautiful experience.

“My season has been great. I lead the national and La Plata racecourse female jockeys’ statistics with 18 winners and an 18 percent strike rate, so it’s great to get some international recognition. The opportunity to compete against some of the world’s best in Saudi is massive for me.”

Pyfer and Marinhas are the second and third female jockeys confirmed to ride in the IJC, after the UK’s Hayley Turner, and will be joined by a further four female riders.

The International Jockeys Challenge features four $400,000 handicaps, with a further $100,000 for the challenge itself and riders receiving 15 percent of prize money won.