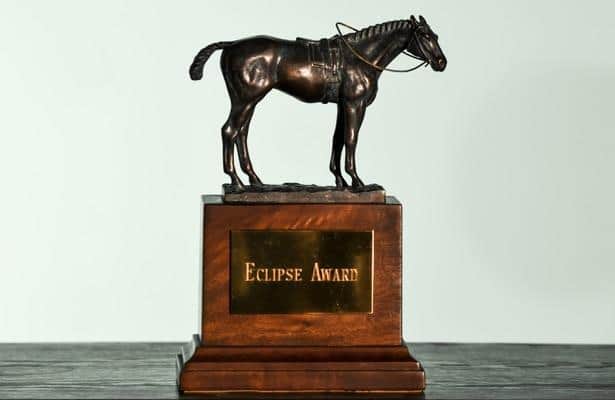 The National Thoroughbred Racing Association, National Turf Writers And Broadcasters (NTWAB) and Daily Racing Form announced today that TVG will televise live the announcement of the finalists in 16 horse and human categories for the 2021 Eclipse Awards on Saturday at 11:30 a.m. EST.

The Eclipse Awards, honoring excellence in Thoroughbred racing, are voted upon by the NTRA, represented by member racetrack racing officials and Equibase field personnel, NTWAB and Daily Racing Form, and are produced by the NTRA.

TVG also will televise live the 51st Eclipse Awards ceremony on Thursday, Feb. 10, beginning with a “Green Carpet” Preview Show Presented by Keeneland at 7 p.m. EST, followed by the Eclipse Awards broadcast at 8 p.m. ET. The ceremony also will be streamed on additional outlets. The evening will culminate with the announcement of the 2021 Horse of the Year. Finalists in the Horse of the Year category also will be announced earlier that evening.

Eclipse Awards ticket information is available at the NTRA website.

Eclipse Awards are named after the great 18th-century racehorse and foundation sire Eclipse, who began racing at age five and was undefeated in 18 starts, including eight walkovers. Eclipse sired the winners of 344 races, including three Epsom Derbies. The Eclipse Awards are bestowed upon horses and individuals whose outstanding achievements in North America have earned them the title of Champion in their respective categories. Eclipse Awards also are given to recognize members of the media for outstanding coverage of Thoroughbred racing.