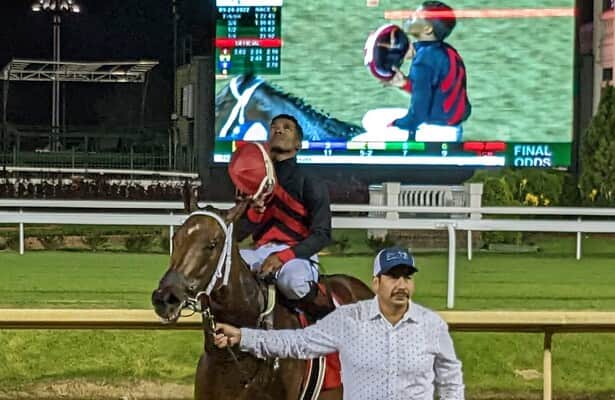 If a pair of victories in $1 million races were the climax, then Echo Zulu’s comeback win Saturday in the Grade 3, $275,000 Dogwood Stakes was the epilogue on a red-letter day for über stallion Gun Runner.

#1 Echo Zulu (1/2) returns a dominant winner in the Dogwood Stakes (G3) from @ChurchillDowns with @RSantana_Jr up for Steve Asmussen.

Last year’s juvenile champion filly Echo Zulu came back from her 4 1/2-month break – and her only defeat – to outclass four of her 3-year-old peers in a triumphant, gate-to-wire return on a perfectly comfortable night at Churchill Downs.

“How fitting on a day when Gun Runner has five stakes winners,” said Echo Zulu’s trainer Steve Asmussen. The same Steve Asmussen who trained Society’s afternoon victory in the Cotillion (G1) at Parx Racing. And Gunite to a win in the Harrods Creek at Churchill. And their sire Gun Runner to a pair of championships that included the Horse of the Year award in 2017.

Oh, yes. There also was Taiba’s triumph for Bob Baffert in the Pennsylvania Derby (G1) at Parx. And Sixtythreecaliber took the Seneca Overnight for Tom Amoss at Churchill. Gun Runners were spreading the wealth Saturday.

The memory of a fourth-place finish for Echo Zulu in the Kentucky Oaks (G1) was made all the more distant by what happened Saturday. Not because that only defeat in seven starts seemed so long ago. Not even because it was a measure of retribution on the same track as that late fade around a second turn in May.

It was just because Echo Zulu reassured her owners L & N Racing and Winchell Thoroughbreds that she was back. Asmussen said he knew it “when she broke” from the gate in Saturday’s one-turn, seven-furlong race.

“When she drew the ‘1’ hole and hadn’t run in a while, it became a concern,” Asmussen said. “But when she hit the ground running, she’s very talented.”

With her Winchell-owned stablemate and likely second choice Wicked Halo scratched in order to find a more suitable race, Echo Zulu (1-2) was sent off as the odds-on favorite. Pressed early by Gunning (7-1), another Gun Runner filly, and also by Colorful Mischief (11-1), Echo Zulu maintained a one-length lead going into the turn.

Tarabi (5-2) closed from last to finish second followed by Colorful Mischief in third, Last Leaf (9-1) in fourth and Gunning in last.

Not only did Echo Zulu make a comeback, but it could be said Santana did, too. The filly and jockey were reunited after Joel Rosario rode Echo Zulu to victories in the Breeders’ Cup Juvenile Fillies and Fair Grounds Oaks (G2) – and the loss in the Oaks.

“I’m really that I’m back with that filly,” Santana said. “She grew up a lot today. She feels more powerful. She wanted to run today.”

That may or may not have been the case in June, when Echo Zulu was scratched by a track veterinarian while the field was being loaded for the Acorn (G1) at Belmont Park. A foot issue was reported, but Asmussen said that was news to him. And apparently Santana, who was watching from back in Louisville.

“I don’t know how that filly got scratched at Belmont, because I saw her training here, and she was feeling good,” Santana said.

The Breeders’ Cup on Nov. 5 at Keeneland seems certain, but in what division? The seven-furlong Filly & Mare Sprint would be an easy choice after Saturday. But how about a rematch with division leader Nest and Oaks winner Secret Oath in the 1 1/8-mile Distaff?

Asmussen was not biting on that question.

“We’re just very happy to have her back at the races right now,” he said. “She’s just a brilliantly talented filly that we’re unbelievably blessed to be associated with.”

One of so many blessings brought to you by Gun Runner, whose progeny have produced 21 stakes winners this year. His six in Grade 1s have come from Cyberknife in the Arkansas Derby and Haskell, Taiba in the Santa Anita Derby and Penn Derby, Early Voting in the Preakness and Society in the Cotillion.

If Echo Zulu, who won three Grade 1s last year, joins the 2022 list, then it will be further affirmation of her being one of the apples of her daddy’s eye.

“As high as we are on Gun Runner,” Asmussen said, “I think (his progeny) are competitive just like he was. They understand what they’re trying to do, and that’s beat them to the wire. They don’t lose their race early. They’re intelligent like him. Not only do they fight. They know what they’re fighting for. Competitive is in knowing what the race is.”