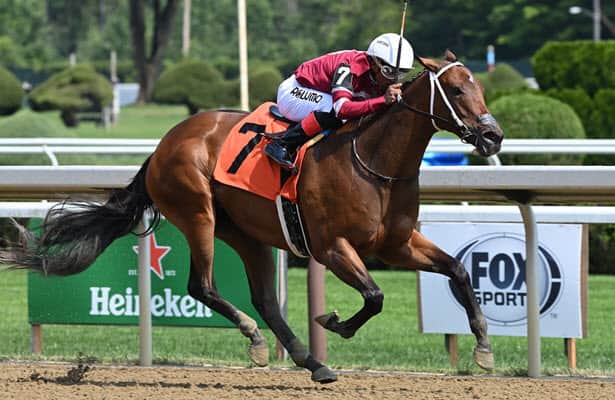 L and N Racing and Winchell Thoroughbreds’ Echo Zulu asserted herself as a rising star with a 5 1/2-length debut triumph in a maiden special weight on opening day at Saratoga for Hall of Fame trainer Steve Asmussen.

The 2-year-old daughter of leading freshman stallion and 2017 Horse of the Year Gun Runner, who also was trained by Asmussen and owned by Winchell, tracked mutuel favorite Lady Scarlet from second, taking the lead in upper stretch and powering home impressively to register a 92 Beyer for the 5 1/2-furlong contest.

David Fiske, bloodstock and racing advisor to co-owner Ron Winchell, said that both the 6 1/2-furlong Grade 2, $200,000 Adirondack on August 8 or the seven-furlong Grade 1, $300,000 Spinaway on September 5 could be in play for Echo Zulu.

“I can imagine she’ll run back in a stake somewhere,” Fiske said. “Whether that’s the Adirondack or the Spinaway, it just depends on how she trains and how she comes out of this.”

Echo Zulu, a half-sister to Grade 1-winner Echo Town and graded stakes winner J Boys Echo, gave her sire an eighth winner in his first crop. Five of his eight winners are owned by Winchell.

“The assessment on most of the Gun Runners is that they don’t have a lot of early gate speed, but they will keep running,” Fiske said. “Everyone has been excited that distance will be where they really start to excel. The performance yesterday was good. She left the gate running, going around the turn laying second. All the other Gun Runners we’ve had don’t have a lot of quit in them. To open up by five and run such a high Beyer was just icing on the cake.”

Asmussen, a three-time winner of the Adirondack, teamed up with Ron Winchell to capture the 2015 edition with Just Wicked.

Echo Zulu, a $300,000 purchase from the Betz Thoroughbreds consignment at the 2020 Keeneland September Yearling Sale, is out of black type producer and graded stakes winner Letgomyecho.