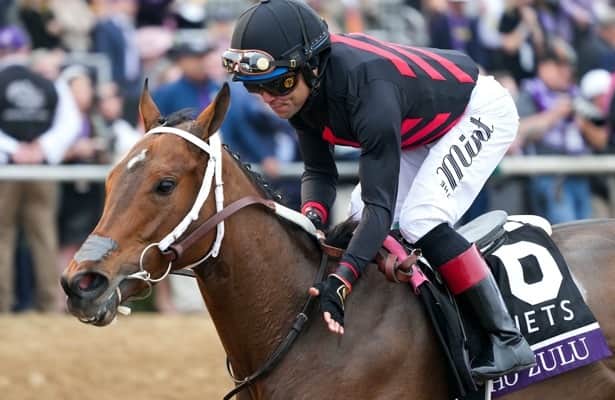 Echo Zulu, undefeated winner of the Breeders’ Cup Juvenile Fillies at Del Mar in November, has arrived at Fair Grounds in New Orleans and could make her next start in the Rachel Alexandra (G2), according to a social media post from Joe Kristufek of Fair Grounds.

The Rachel Alexandra on Feb. 19 offers Kentucky Oaks points to the top four finishers in 50-20-10-5 payouts.

Trainer Steve Asmussen reports that his undefeated @BreedersCup Juvenile Fillies winner Echo Zulu arrived @fairgroundsnola this morning, and that the Rachel Alexandra (G2) presented @FasigTiptonCo, which should already be a G1, is on his radar.

The Gun Runner filly is 4-for-4 for trainer Steve Asmussen. In addition to the Juvenile Fillies, Echo Zulu also has Grade 1 triumphs in the Spinaway at Saratoga and the Frizette at Belmont.

Echo Zulu is owned by L and N Racing and Winchell Thoroughbreds. She was a $300,000 purchase at the 2020 Keeneland September yearling sale.

Asmussen has seen his fair share of success in the Rachel Alexandra. The Hall of Fame trainer, who leads North America in all-time training wins, won the race in 2019 with Finite and 2020 with Clairiere. Additionally, he won in 2007 with Appealing Zophie and in 2005 with Summerly, when the race was known as the Silverbulletday Stakes.