Echo Town turns tables on No Parole in Saratoga's Jerkens 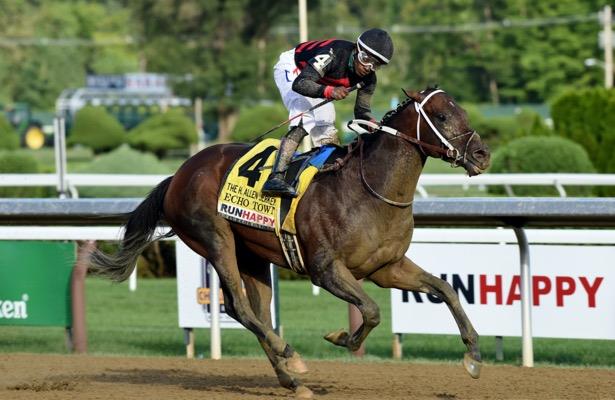 Echo Town didn’t get the right setup last time he faced No Parole. But he did this time, and he proved much the best Saturday with a closing move in Saratoga’s Grade 1, $300,000 H. Allen Jerkens Stakes.

Trained by Steve Asmussen, Echo Town made his graded stakes debut June 20 in Belmont Park’s Woody Stephens (G1). No one was able to pressure front-running No Parole that day, and Echo Town settled for second behind the convincing winner.

No Parole again went out to the lead of Saratoga’s seven-furlong Jerkens, but the 2-1 favorite was under fire. Eight Rings held close to the pace setter through an opening quarter-mile of :22.67, and Mischevious Alex was there to press No Parole through a half-mile in :45.31.

As the field entered the stretch, Echo Town sat fourth behind a top trio of No Parole, Mischevious Alex and Tap It to Win. Jockey Ricardo Santana Jr. found running room for Echo Town coming four-wide threw the stretch, and he powered on to the win.

“He ran an excellent race,” Asmussen said. “Extremely significant to win the Allen Jerkens, a special race for him. Ricardo did a great job with him today. I think the timing of this race was better for him than going into the Woody Stephens and he showed it today.”