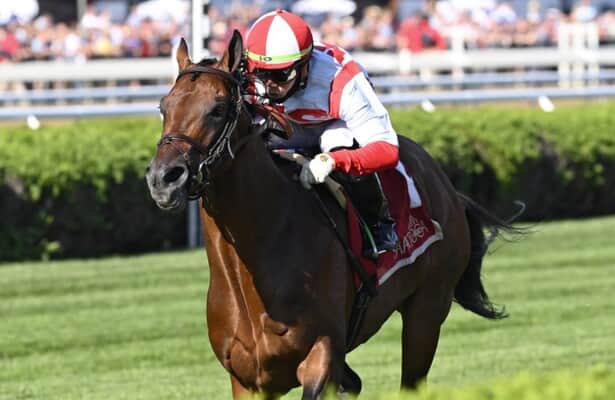 A capacity field of 14 and one also eligible were entered for Saturday’s Hollywood Derby, the first of two Grade I events on the weekend as the eighth Bing Crosby Season at Del Mar draws to a close.

Trainer Chad Brown, who has successfully dispatched 3-year-olds from his New York stable to victories in the 1 1/8 mile turf test three times in its eight runnings at Del Mar, will be represented by multiple-stakes winner Public Sector and Sifting Sands. They were part of an eight-horse contingent that arrived earlier this week as Brown seeks to add to his nine previous wins in stakes that comprise the meet-closing Turf Festival and make it back-to-back scores in the Derby.

Domestic Spending’s victory by a head over Smooth Like Strait in the 2020 Hollywood Derby was the first in a streak of four straight Grade 1 victories that carried over to June of this year. Irad Ortiz, Jr., who rode Domestic Spending, has the call on Public Sector.

Irad’s brother, Jose Ortiz, will be aboard Sifting Sands as the siblings, Nos. 2 and 4 in national purse earnings for 2021, venture from New York and put their talents on display here for the weekend. Hall of Fame veteran John Velazquez also will take up temporary residence in the jockey colony and will ride In Effect for Jack Sisterson in the Derby.

The locally-based line of defense against the eastern invaders is led by the 1-2-3 finishers in the Twilight Derby at Santa Anita on October 31 – Subconscious, Cathkin Peak and Beyond Brilliant. Subconscious, a son of Tapit trained by Hall of Famer Richard Mandella, has gone from a maiden victory here in his fourth career start to the Grade 2 level triumph in the Twilight Derby in a span of two months.