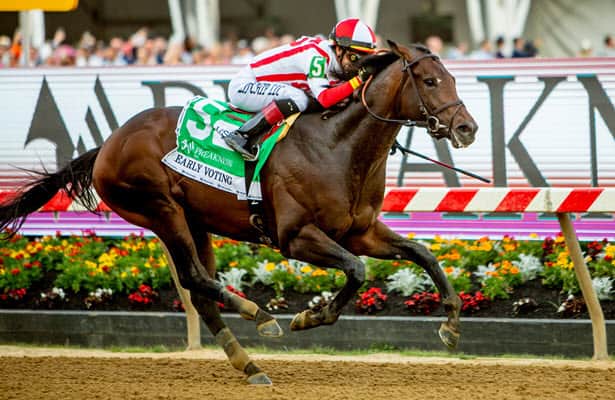 José Ortiz was doing what he was charged with doing Saturday. Being laser focused on the 1 3/16-mile ride he had on Early Voting in the $1.65 million Preakness Stakes.

Shortly after he crossed the finish line a winner, then Ortiz’s mind switched back to his family and his roots in Puerto Rico and the people both there and here in the United States who made him the star jockey he is today.

Then Ortiz flashed back another generation

“I lost my grandpa,” he said, fighting back tears nearly an hour after the race as he had when he was finishing it. “It was a while ago, but he meant the world to me.”

It is no secret the Ortizes are close. The brothers, both Eclipse Award-winning riders. An uncle and another grandfather also were jockeys.

Composing himself again, Ortiz said the victory – the biggest of his life this side of a Belmont Stakes and three Breeders’ Cups – went exactly as he pictured it.

“This race is a dream come true for any rider,” he said. “We were very close with Good Magic (fourth by a length to Justify in 2018). I still feel he was the best horse in the race that day, but it was crazy conditions and fog, sloppy. And honestly, I didn't have the best trip.”

This trip around Pimlico could not have gone more according to plan for Ortiz and Early Voting. They started alertly, sat no more than 2 1/2 lengths off the pace and then took control of the lead from pacesetting Armagnac (18-1) just before straightening for home.

Post-time favorite Epicenter (6-5), who got bottlenecked at the start, was coming fast at the end, but he and jockey Joel Rosario came up 1 1/4 lengths short.

#EarlyVoting (5/1) takes the Preakness Stakes (G1) at Pimlico over #Epicenter with @jose93_ortiz in the irons for @TheRealChadCBr1.

“You’ve got to leave the gates,” said Epicenter’s trainer Steve Asmussen, whose colt has finished second as the favorite in both the Kentucky Derby and Preakness. “They go 24-and-1 (seconds). That just left him way too much to do. If you don’t leave the gate you get one option. I was past surprised. I was disappointed.”

“The break was OK,” said Rosario, who probably was in the minority with that opinion. “It looked like everybody wanted to get in position right away. I had to go to another plan, which was to be inside the whole race. If I had another opportunity, I wouldn’t have been inside.”

Eventually, Ortiz figured Epicenter would be coming, so he looked over his shoulder in the stretch. For Epicenter. And for the other seven horses.

“I knew I was in the right position,” he said. “I knew we were going on a pace that was moderate. It felt like 47 and change (it was 47.44 seconds). My horse was doing very nicely. I was very happy with my position.”

The result validated a couple of decisions by trainer Chad Brown. One was to stay in New York with the Gun Runner colt, who was bought for $200,000 as a yearling and is campaigned by Seth Klarman. The other was to have Ortiz stay with Early Voting for the Wood Memorial (G1). That meant taking him off Zandon, who landed with Flavien Prat.

Brown had to have a tough conversation with Ortiz.

“I called him to tell him, and he never complained about it,” Brown said. “He said, ‘Boss, I’ll go where you tell me to go.’ That’s it. He was happy to ride Early Voting. It was hard to be taken off Zandon when they were on the same day, because we knew that horse was probably going to go win the Blue Grass and go to the Derby as one of the favorites. Talk about being a team player.”

On April 9 at Aqueduct, Ortiz and Early Voting finished second in the Wood Memorial (G2). Less than a half-hour later at Keeneland, Zandon and Prat won the Blue Grass (G1) at Keeneland, and they went on to finish a game third in the Kentucky Derby.

With Early Voting skipping Louisville, Ortiz rode Simplification to fourth in the Derby. As the dominos fell, John Velázquez wound up Saturday on Simplification (8-1), who finished sixth.

The trip Early Voting took to the Preakness was a familiar one for Brown and Klarman, who celebrated his 65th birthday Saturday. It was the same trail that led them to a Preakness victory in 2017 with Cloud Computing. Each had but three races, all at Aqueduct, and each skipped the Kentucky Derby before earning the Woodlawn Vase in Baltimore.

“I’ve always felt that New York is a fine place to develop these kind of horses,” said Brown, a native of upstate New York. “I think a lot of it probably comes down to circumstances where the horses end up some years. It looks to be a little slanted here or there, or this race is a poor prep. You have a couple of crops where that can all change, right? It just depends on the horse and always just being aware of your environment where you are training these horses. And New York is a good environment.”

So, too, is Baltimore, where Klarman grew up not far from Pimlico.

“I’ve lived my adult life in Boston, but it’s an incredible experience to come back to my hometown and have a chance to compete at this level,” Klarman said. “José gave a brilliant ride. It’s one of the highlights of a career owning racehorses. A really extraordinary feeling.”