Dynamic One takes the Curlin in 1st start since Kentucky Derby 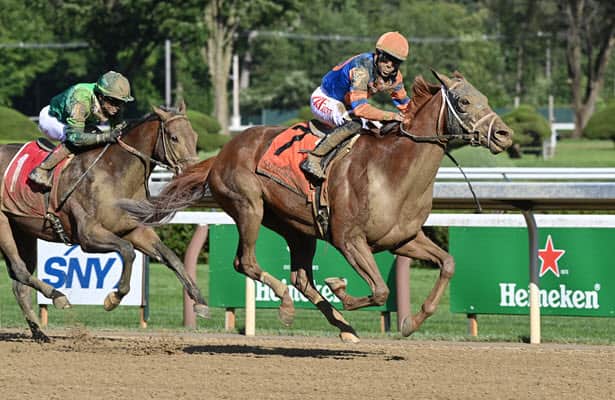 Dynamic One benefitted from a freshening following his Grade 1 Kentucky Derby appearance, returning off a nearly three-month layoff to go last-to-first in posting a 1 3/4-length win in Friday’s nine-furlong $120,000 Curlin Stakes at Saratoga Race Course for 3-year-olds who have not won a graded sweepstakes over a mile in 2021.

Owned by Repole Stable, Phipps Stable and St. Elias Stable, Dynamic One set up a potential next start in the Grade 1, $1.25 million Travers (G1) Aug. 28. The potential path to the Travers has been an intriguing one for Dynamic One, who did not make his stakes debut until the Wood Memorial (G2) in April at Aqueduct Racetrack.

After running second, a head back to Bourbonic, in the Big A’s signature race, the Union Rags colt earned enough points to qualify for the “Run for the Roses,” where he finished 18th on the first Saturday in May at Churchill Downs.

Hall of Fame conditioner Todd Pletcher then gave Dynamic One time off, training him at Belmont Park before shipping to Saratoga, and the respite worked wonders on Friday. He broke from the outermost post 7 under jockey Irad Ortiz, Jr., who was content to take back as Snow House led the field through an opening quarter-mile in 23.63 seconds, the half in 47.34 and three-quarters in 1:11.14 over a track rated good.

After saving ground along the backstretch and into the final turn, Ortiz, Jr. tipped out Dynamic One around the far turn, using a five-wide move that placed him to the outside of a game Miles D. The two linked up in the stretch before Dynamic One pulled away under his rider’s left-handed encouragement, hitting the wire in 1:49.36 to earn his second career win in seven total starts.

“There looked to be an honest pace on paper and we just wanted to let him settle,” said Pletcher, who previously won the Curlin with Outplay in 2017 and Turbo Compressor in 2011.

"I could tell down the backstretch that he was travelling really well and that Irad had a lot of horse," Pletcher continued. "He said when he tested him to see where he was around the half-mile pole, he still felt like he had a lot of horse, so he waited a little longer and waited longer down the lane.

“He’s a horse that always trained exceptionally well,” Pletcher added. “We always felt like there was a lot of talent there. It’s taken him a little while to mentally put it all together, but today was his most professional race.”

Ortiz, Jr. won his second career Curlin, adding to his score aboard Hofburg in 2018.

“He’s growing up mentally,” Ortiz, Jr. said “His mind’s a lot better right now. He went by and he kept going. Before he’d look around and play around. Today, he was much better.”

Pletcher said the $725,000 purchase at the 2019 Keeneland September Yearling Sale could now target the Travers, which will be contested at 1 1/4 miles.

“I think he definitely showed that he is capable of stepping up and we were looking at this as a potential Travers prep and he gave us everything we could have hoped for today,” Pletcher said.

Co-owner Vincent Viola [St. Elias Stable] echoed his trainer’s sentiments about targeting one of the most prestigious races for 3-year-olds next month.

“He’s been coming around to that, I’d like to see his number off today’s race,” Viola said. “I really think he’ll be competitive in the Travers. I think that’s where Todd will aim him after today. It’s up to Todd, but that’s what we’re thinking.”

“I had a good trip but we were probably second-best today,” said Miles D jockey Joel Rosario. “I thought we had the race won turning for home and that horse [Dynamic One] made the last move and beat us. He ran really well."

First Captain, who entered 3-for-3, including a last-out victory in the Grade 3 Dwyer on Belmont Stakes Day June 5, finished 1 1/4-lengths clear of Harvard for third. First Captain jockey Jose Ortiz said Collaborate lugged out when the duo straightened for home, but did not alter his chance at collaring Dynamic One.

“I was expecting him to be a little bit sharper,” Ortiz said. “He was a little bit lazy early on. We were making a good run until the quarter pole and Collaborate blew the turn and it hurt me a little bit, but I don’t think I would have won the race anyway.”

Snow House, Collaborate and Beren completed the order of finish.