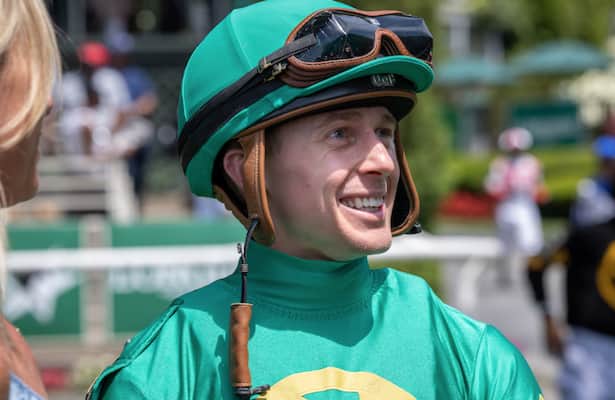 Call jockey Dylan Davis and agent Michael Migliore racing’s odd couple. They also might be referred to as a dynamic duo.

Davis is atop the rider standings as Belmont Park’s spring-summer meet approaches its July 10 close, and his fortunes have risen steadily since he rather reluctantly hired Migliore to represent him in 2017.

“I didn’t know much about him. I didn’t really want him,” Davis recalled. “But he showed determination. He was out there as much as I was. There was no agent who asked for me more than him.

In discussing their backgrounds, Migliore describes them as coming from “two different parts of the universe.” Davis, the son of former jockey Robbie Davis, grew up in Saratoga Springs, N.Y. He was quiet and reserved, seemingly to a fault. That changed after he hired the relentless Migliore, who sounds and acts like the Brooklyn native he is.

Or as Migliore said in reflecting on his rough-and-tumble background, “No one was taking my lunch money.”

Migliore observed a dedicated yet struggling rider he thought he could mold into something special.

“He’s got all the tools to be a great rider. I saw it,” Migliore said. “All he needed was confidence and better horses to ride. I hate to say he was riding for the wrong people, but he was.”

Davis was so weary after a succession of hopeless mounts that he was prepared to leave the New York circuit his father had mined for many years. Migliore was at his persuasive best in convincing him to stay.

“We will start riding for the right people,” the agent assured him. “And we will make it.”

There is every sign that Davis, 27, is on course to not only make it but make it big. He captured his first Grade 1 victory when he guided Mutamakina home in the E.P. Taylor Stakes at Woodbine last October for accomplished trainer Christophe Clement.

He used Aqueduct’s winter meet to secure his first New York Racing Association title. He withstood the wind and chill to ride 63 winners for purses totaling almost $3.5 million. He competed in his first Triple Crown race when Hall of Fame conditioner Mark Casse gave him a leg up on long shot Golden Glider in the Belmont Stakes.

And now he is dueling Irad Ortiz Jr., a three-time Eclipse Award winner as leading rider in North America, for top honors at Belmont’s uber-competitive meet. As of June 29, Davis held a tenuous 42-39 margin. Manny Franco ranked third with 34 wins.

Davis said of his ability to provide an encore to his winter breakthrough, “I think it’s going to get me even more recognition going into the Saratoga meet. Winning the Belmont meet would be huge for me.”

Whatever the outcome, Davis is a changed young man since Migliore refused to be turned away. The two have become so close that the rider refers to him as “almost a second father.”

Davis said of the difference Migliore has made, “I was more quiet. I was a little shy. He was more open and aggressive and more wanting to be face to face with people. He told me I needed to get better at that and work on my communication and have that confidence to go up to an owner or trainer and talk to them about their horse. Now, I can go into any barn and feel confident and talk to anybody.”

In a sense, Davis received the benefit of two members of the Migliore family when he hired Michael.

Davis will always treasure the guidance he continues to receive from his father. But former jockey Richard Migliore also weighed in with astute observations.

“I needed another point of view on my riding. He helped me fine tune my riding ability and really helped me get to the next level,” Davis said.

Among other things, Richard urged him to allow horses to find their natural stride. “I would let them run out and take a big hold,” Davis said.

Davis’ journey to the top is hardly complete. He is still striving to make inroads with the biggest training operations. He has not landed a big horse that would give him the opportunity to show what he could do in a series of major stakes races.

But Davis is confident he can consistently vie for top honors in a New York jockey colony filled with elite riders even before the recent arrival of West Coast star Flavien Prat.